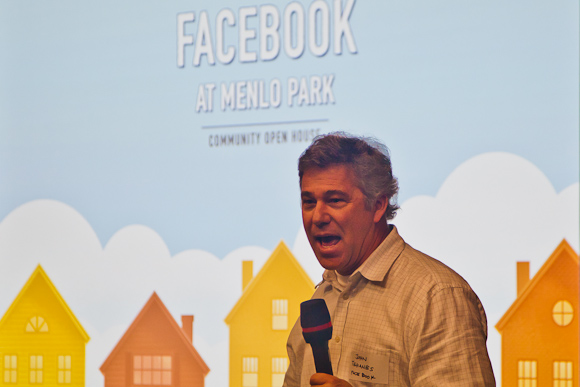 Facebook held an open house for community leaders on Tuesday (12/6) at its new Menlo Park headquarters campus at the east end of Willow Road — which is now also sporting a brand new street address: 1 Hacker Way. 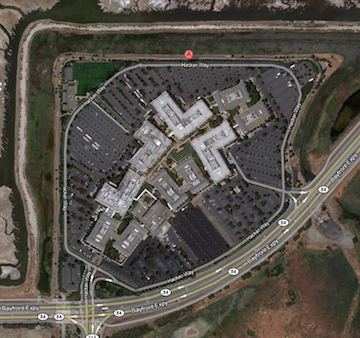 The purpose of the open house was to share with the community several of the initiatives that Facebook is pursuing as part of opening this exciting new headquarters location.

Facebook’s head of real estate John Tenanes (above) introduced each of these initiatives with his opening comments and encouraged attendees to engage with and provide feedback to Facebook leaders for each of the initiatives.

The largest table at the event was devoted to economics — and the benefits this new campus will bring to Menlo Park and the area from new jobs, increasing demand for local retail and lodging services, and attracting other companies who tend to cluster near major corporate headquarters.

But the most immediate benefits are related to the significant construction activity taking place to get the campus ready. I spoke with one electrician who said she was “over the top” happy to be working on the Facebook project.

Sustainability is another major initiative — with goals to reduce energy demand by up to 30% and water usage by up to 40%. 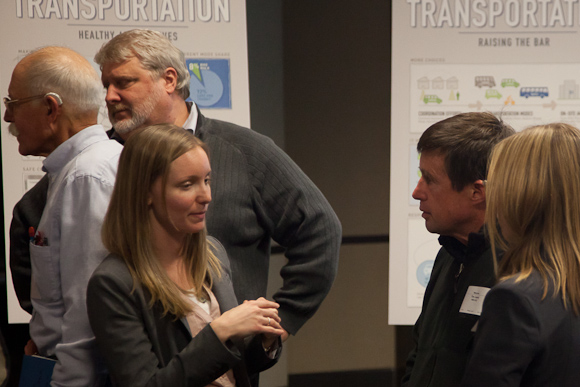 Facebook is also very focused on providing transportation options for its employees to get to the new campus, Planners have put together a combination of approaches to get more people to its campus with fewer cars, including emphasizing carpools, providing shuttles, and car sharing programs such as Zimride. Zimride enables ride sharing within social networks — friends quickly find rides to share. No surprise here — you’re much more likely to be willing to share a ride with someone in your social network than you are with a stranger.

What a surprise to see Facebook at the end of Willow Road. I worked at the Menlo Park VA and the USGS Library in the 1970’s. I’m a bit techno-averse, but I’ve been retired long enough that I’m not “required” to maintain my computer skills. Yes, I’m being dragged, kicking and screaming into the 21st Century. I’m no nudite, but I teach a navigation seminar on piloting with out the use of electronics. The reason, I tell my audience is that they shouldn’t be “one electron” from getting lost. I’ll spare you the sea stories. Oh, back to my issue at hand. I get an increasingly large number of Facebook messages, now. I’m wondering if you can recommend a web site or tutorial that will lead me through the workings of Facebook, without making my eyes glaze over. Back in the 1950’s and 1960’s I was growing up in Palo Alto. It was pretty “high tone” then, but now I see that my hometown is so trendy that even the homeless people have lap tops. Please come up and visit us on the Oregon coast sometime. We welcome visitors. Robert Taylor, Roseburg, Oregon