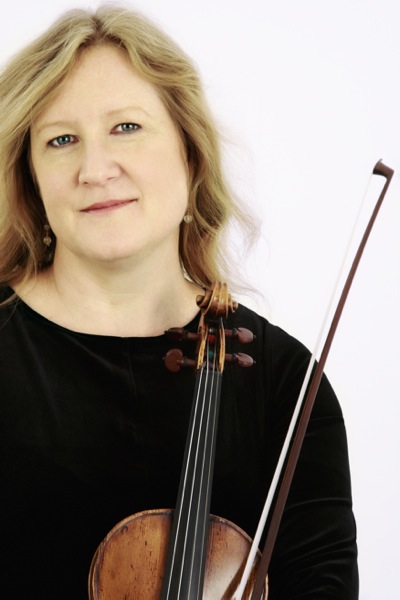 Menlo Park native Krista Bennion Feeney, who graduated from Menlo-Atherton High School, returns home to join the New Century Chamber Orchestra as a soloist for a special holiday concert on Tuesday, Dec. 13 at 8:00 pm at the Menlo-Atherton Center for Performing Arts.

“It’s always special to come home, even though I haven’t lived in the Bay Area since 1981,” she said. “I get to see people I haven’t seen in a long time, people from my childhood and teenage years.”

Krista, who plays on a Vinenzo Panormo violin, will perform Franz Joseph Haydn’s Violin Concerto in G Major, Hob. VIIa: 4. “It’s a piece that’s rarely performed in public except by students,” she said. “It’s one of Haydn’s earliest concertos. He composed it shortly after he got a paying job. I think he was floating on a cloud. It’s so happy and joyous.”

Growing up in Menlo Park, Krista said she never made a conscious decision to become a professional musician: “It was just who I was. We lived with my grandmother who was a piano teacher and there were three pianos in the house, so I played very early in my life. Then I was blessed with having a succession of really wonderful teachers.”

Krista served as New Century’s Music Director and Concertmaster from 1999 to 2006. Along with her numerous orchestral appearances, she performs on the World Premiere recording of John Adam’s Shaker Loops, one of the definitive pieces of the 20th century. She has worked on albums by Wynton Marsalis and Paul Simon, and has performed with Sir Paul McCartney at the Library of Congress.