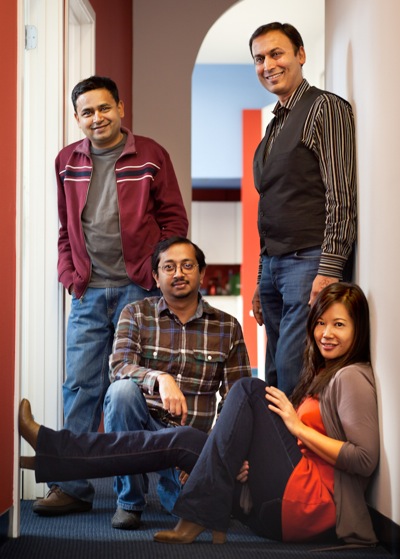 They call it Club 1919. “It” being the totally accidental office space that Menlo Park-based start up Poshmark finds itself in at the corner Menalto and Gilbert in the Willows neighborhood.

“It’s almost as if the space was built for us,” says Tracy Sun, one of the four founders. “Look at all the mirrors and the colors!”

Adds founder and CEO Mannish Chandra: “Our culture is very community-centric and this neighborhood is all about community. Kathleen [Daly, owner of nearby Cafe Zoe] welcomed us with sandwiches and salad!”

Poshmark describes itself as  a mobile fashion marketplace built around real-time social experiences. Posh Parties are themed, real-time shopping events where people gather to shop, share, and sell fashion via their phones. (Hmm, maybe just the way to rid yourself of some unneeded/wanted holiday gifts.)

Poshmark’s free iPhone App can be downloaded. Listings are also free; the company generates revenue by taking 20% of the listing price.

“Every three years, nearly one trillion dollars is spent on fashion items that then sit in our closets,” said Manish. “We created Poshmark so that anyone can easily convert their closet into a stylish boutique.

“Fashion is one of those things that’s 24/7. We offer a continuing supply of inventory built around a social architecture. Women find other women like themselves, who have their style and wear their size. In that regard, it’s more like a social networking app than an e-commerce app.”

By participating in a Posh Party, women can also get real-time guidance from each other. “It’s almost like curation, but the women are curating together,” said Manish. “We want to make it fun, almost like a sport.”

Poshmark was founded in early 2011 and officially launched at the beginning of December. The four founders are Manish (standing right), Gautam Golwala (seated left), Chetan Pungaliya (standing left) — all formerly of Kaboodle — and Tracy, who has a fashion industry background. The company secured $3.5 million in Series A financing, led by the Mayfield Fund, with participation from previous Kaboodle investors Kanwal Rekhi through Inventus Capital, Jeff Clavier through SoftTechVC, and Ron Conway through SV Angel.