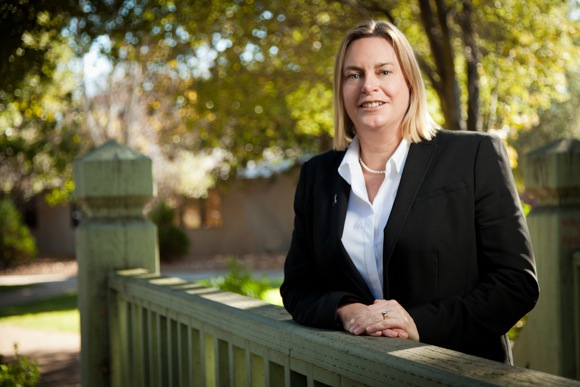 Editor’s note: On Saturday, Feb. 4, Menlo Park City Council member Kirsten Keith, who is serving this year as the city’s Mayor, announced that she was entering the race for a seat on the San Mateo County Board of Supervisors. Our conversation with Kirsten took place a few days before the announcement.

Asked via email why she decided to run for Supervisor, she responded: “I was contacted by many people who encouraged me to run…The issues I work on as a Council member directly translate to the work of a Supervisor.  Both focus on ensuring the safety of our residents, creating a sustainable budget, growing business development opportunities, working on land use issues, streamlining ordinances, generating new revenue, trying to do more with less, keeping parks open and safe.”

“I like to go outside my comfort zone to challenge myself,” she says. “That’s one reason I climb mountains – I’ve hiked Mt. Rainer, Mt. Shasta and Mt. Whitney and participate in a weekly hiking group when I can.”

A criminal defense attorney by occupation, Kirsten and her family (husband John Woodell and two children, who both attend local public schools) moved to Menlo Park 17 years ago, buying their first house in the Willows. “We loved the neighborhood, loved the trees, ” she recalled.

Growing up, Kirsten lived in different parts of the world, depending on where her mining engineer stepfather was working. She was in Chile when Augusto Pinochet was in power. “We were all very aware of the dictatorship,” she said. “I came away with the belief that people need to take an active role in government. As an attorney, for me it’s about defending the underdog, looking out for people who don’t have as many resources.”

Before running for City Council in 2010, Kirsten had served on the Menlo Park planning and housing commissions, both appointed positions. She said she first sought elective office because of her “interest in social justices issues.”

“We have a wide economic spectrum in Menlo Park,” she said. “For example, lots of the programs in the Belle Haven neighborhood are subsidized. We have to figure out as a community how to fund things so that programs don’t fall through the cracks.”

As Mayor and Council member, Kirsten says she’s available to talk with residents. “There are difficult decisions ahead due to the budget cuts that will need to be made,” she said. “But, we can all make an impact here in our community. It’s an exciting time to be on the Council, and Menlo Park is a great place to live.”