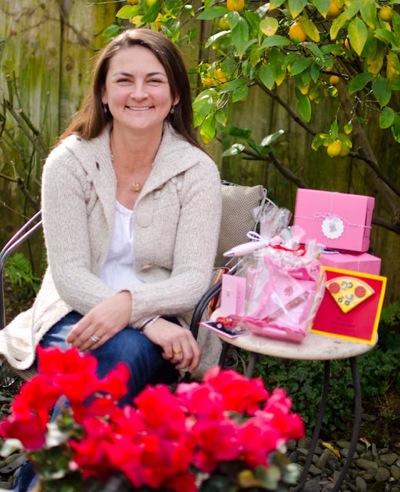 Want a run of the mill Valentine? Proceed to one of the many stationery or drugstores in the area. Want something that will knock the socks off the recipient, or at the very least, be like no other? Talk to Alexis Murphy.

Before her two children were born, Alexis worked in the hospitality industry for high-end properties like the Ritz Carlton. For VIP and return guests, she added little extra touches to welcome and thank you notes. Finding herself a stay-at-home Mom, she started doing birthday invitations for her children’s parties, then custom invitations and party favors for friends. Her initial dabbling blossomed into a home-based business, Jac o’ lyn Murphy.

“I’ve been lucky and gotten great word of mouth, people asking ‘where’d you get that invitation you sent me?'” says Alexis, who has lived in Menlo Park for 10 years. “To further spread the word, I started a blog which shows samples of projects I’m working on.”

Fans of Alexis say she thinks outside the box. For example, when a family of four needed a “we’ve moved” announcement, she played on their Scottish surname, illustrating card stock with four small to larger-stacked suitcases, adding a dog bone on top (for the family pooch) and “wrapping” it all together with a plaid ribbon.

“I like to sit down with people and figure out who they are, where they’re coming from and what they need,” Alexis says. “From there, I get creative.”

And, that’s the reason one young Menlo Park kindergartner will be giving out pencils to his classmates on Valentines Day rather than packaged cards. Instead of “Be Mine” (hard at age five or six!), the message is “You’re write on!”

I can’t believe someone this beautiful, this creative & this kind…has finally got some great comment in print! Kudos all round.