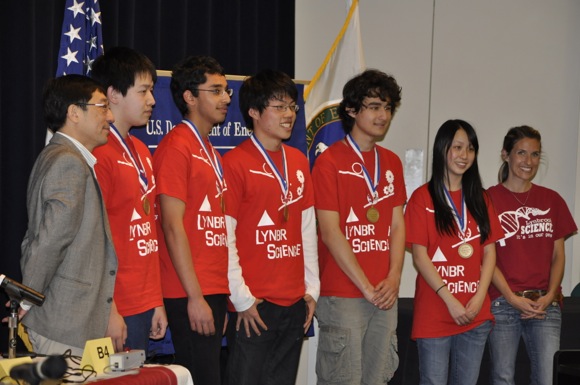 Teams from 20 participating high schools competed against each other at the Department of Energy 2012 Bay Area Regional Science Bowl held at the Panofsky Auditorium on the SLAC campus in Menlo Park on Saturday (2/10). When the final round began at around 3:00, two teams from San Jose were left standing — Lynbrook High School Team 1 and Bellarmine College Preparatory. After two 8-minute halves, Lynbrook emerged victorious and is on its way to the National competition.

Lynbrook, who received its first place medals from SLAC’s associate laboratory director Chi-Chang Kao (far left in top photo), did not lose a round all day. The five member team, who all competed at some point today — in actual rounds there are four participants — was coached by Amanda Alonzo (far right in top photo).

This was the eighth annual Science Bowl held at SLAC. Two types of questions are used, toss-up and bonus. A toss-up question can be answered by any of the team members. When a team answers a toss-up question correctly, they get a chance to answer a bonus question. The high school question categories are biology, chemistry, earth and space science, energy, mathematics, and physics. 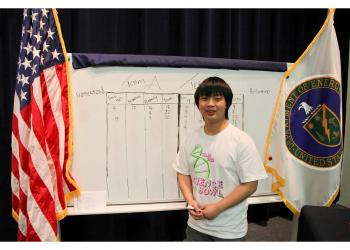 Alvin Jin, now a freshman at UC Berkeley, was one of the MVPs from last year’s competition. He was on the Homestead High team which won the regional competition and competed in the national event in Washington, D.C. This year, he was on hand as a volunteer, serving as a scorekeeper.

“Science Bowl was a fun way to incorporate and apply education in a competitive manner,” he said. “I remember being very nervous and my coach, during one of the breaks, told our team ‘Remember the War of 1812.’  It was a random statement that left the entire team confused but it did help loosen the tension!”

Wondering about the type of questions asked? Here are two samples:

Bonus Question – Chemistry, short answer
1) How many sigma and pi bonds, respectively, are there in a molecule with the following formula: CH3CHCHCH2CH3
Answer:  SIGMA  14;  PI = 1

This year’s National Science Bowl will be held in April. The event was started in 1991 to encourage student involvement in math and science activities of importance to the Department of Energy and the nation. A National Science Bowl for Middle School Students was started in 2002 and includes two types of competitions — an academic math and science competition and a model car race. The car race provides the students with a “hands-on” science and engineering experience where the teams design, build, and race their model cars.