Keith Bowerman moves forward on his dream of opening a bakery 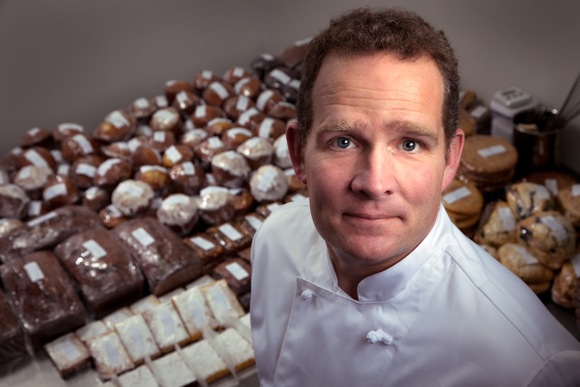 A leap from working as a field service engineer to becoming a baker may seem vast, but not so, according to Willows resident Keith Bowerman, owner of Bluchild, which specializes in baked goods and specialty cakes.

“There is creativity in both,” he says. “When I was doing engineering, you had to be creative to solve the problem. When I’m baking, I call upon another set of creative juices.”

Keith grew up watching his mom make wedding cakes. Over the years, he decorated cakes in his spare time. “People were appreciative of my abilities,” he says. He decided to change professions and attended the International Culinary Center in Campbell to learn about baking and pastry making.

He’s been selling his goods at Cafe Zoe since last May and recently rented his first commercial kitchen with the idea of expanding his product line. “Kathleen [Daly, owner of Cafe Zoe] has been supportive since the beginning,” he says. “I sold three kinds of pies on Thanksgiving and Valentines Day cookies. If you come to Zoe, almost all the baked goods are Bluchild, except for croissants and danishes.”

Keith, who also provides oat bars to the Willows Market, is looking forward to baking bread and other yeast-based products from his new kitchen. “I started with a passion around cake decorating,” he says. “But after going to school and learning different aspects of baking, what I want to do eventually is open an old-fashioned bakery. The new kitchen helps move that dream along.  I want to first expand the wholesale line and then open a retail space.”

Keith can be contacted for special orders at bluchildbakeshop@yahoo.com.