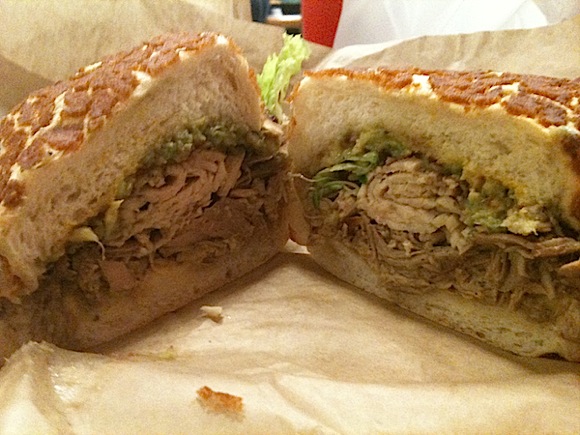 This Menlo Park classic has been around for around 20 years and is representative of downtown Menlo Park as a whole. Café Borrone combines a European-style café with a bustling California sandwich shop into the perfect restaurant. Their sandwiches are classy and unique, in that each has a particular type of bread, cheese, and sauce to accompany any meat and vegetables. Unlike many sandwich shops in the area, the Café Borrone sandwiches are almost impossible to recreate at home. Although pricey, Café Borrone (commonly known as  “Borrone’s”) offers the perfect “hang-out” spot, dead in the center of Menlo Park, and of course the delicious food is a plus. Fun fact: Menlo Park’s Café Borrone is actor James Franco’s favorite restaurant!
My recommendation: a chicken salad sandwich with a frosted mocha

Jan’s Deli
Rating: ★★★★★
Tucked away on the fairly unassuming Alma Street in Menlo Park, Jan’s Deli has been making phenomenal sandwiches for as long as most can remember. A common favorite of water polo players and anyone who likes to eat food, Jan’s stays true to the art of the sandwich while keeping its prices modest. According to senior Madeline Drace, Jan’s, “Has the best sandwiches in the history of the world. Infinity stars.”
My (and Madeline’s) recommendation: roast turkey sandwich with everything, avocado, and cranberry sauce (pictured) and an Arizona iced tea.

The Village Cheesehouse
Rating: ★★★★
Cheesehouse is a cute sandwich shop in Town and Country Village in Palo Alto but gets docked a star for A) charging $1.50 for avocado, c’mon! and B) not providing a seating area inside. Despite the ridiculous prices and awkward ambiance, the sandwiches themselves are pretty remarkable. There is only one size, yet serves perfectly enough for an entire meal, or even two for those with small appetites. Another plus is the ability to completely customize the sandwich yourself, making it different from most other sandwich shops in the area.
My recommendation: a turkey sandwich with Jarlsberg cheese, avocado, and sprouts on Dutch crunch bread

LeBoulanger
Rating: ★★★
LeBoulanger was originally a family bakery in the 1980s and has developed into a restaurant serving hearty sandwiches, soups, and pizza. The one outstanding part of LeBoulanger is, as expected, the bread. The sauces are good though the meat can be a little dry. The sandwiches overall are pretty good, but “pretty good” should not cost $12.50. Overall, a solid restaurant that again, does not justify its prices.
My recommendation: the hot chicken and bacon sandwich topped with Dijon mustard

Quiznos
Rating: ★★★
Quiznos is a Denver-based sandwich company that has been around for over 30 years. It’s basically an average chain deli, with extra credit for toasting every sandwich. At one point, Quiznos was at the top on the list of sandwich places around town, but with higher-class sandwich sales on the rise, it has been overshadowed. Their rich sauces will always be a hit in my book, but the bread is relatively generic, as are most of their sandwiches.
My recommendation: the mesquite chicken sandwich on whole grain bread

Subway
Rating: ★
Famous for their “Five Dollar Footlong” commercials, Subway epitomizes a cheap attempt at creating a successful sandwich shop. Subway now has over 34,000 locations worldwide but however economically successful this chain has become, their food tastes plastic-y and fake. Subway’s sandwiches are cold, soggy, and the farthest thing from appetizing I have tried in a long while. No thank you, I’ll pass.
My recommendation: A diet coke.

I have to disagree on the Subway comment. When you are looking for a cheap, fast alternative to McDonalds or other fast food joints- Subway is a perfectly acceptable choice.

No it isn’t artisan bread, no it isn’t fancy, yes you could probably make it at home… but the point is you dont have to.

Diversity in toppings puts you in charge of exactly what you get. I recommend the Flatbread footlongs (Turkey or Roast Beef) everything on it, no mayo- extra mustard… DELICIOUS!

you left off ike’s place @stanford!!