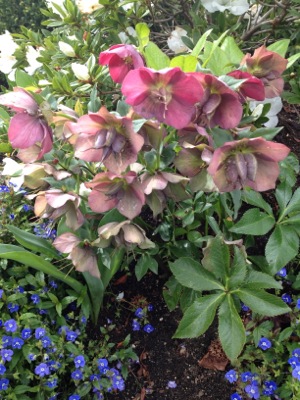 Except for a few surprising late afternoon cloudbursts, Sunday saw a respite from the series of rainstorms, after overnight precipitation measuring .1″ according to Bill Russ’s rain gauges, bringing the year-to-date rainfall to 7.1″ Those who didn’t mind the blustery cold wind could get out and about ito see what was blooming, including this Lenten Rose, which was spotted bordering a west Menlo Park garden. Helleborus Orientalis is the botanical name of the popular, early blooming shade perennial that is actually a member of the Butter Cup not Rose family. They do bloom during the season of Lent (which proceeds Easter in liturgical churches), even in climates much cooler than the Bay Area.