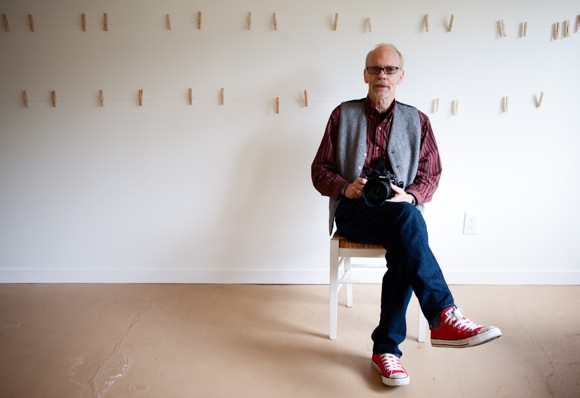 Photojournalist Neal Menschel never thinks of himself as totally on vacation. “Whether I’m walking, driving, whatever I’m doing, I have a camera and am on the lookout for stuff,” he says. “That’s the great thing about photography — you get to hang out.”

Neal’s been doing just that for the past 30 years, working both as a free lancer and staff photographer, including a 13 year stint with the Christian Science Monitor, where he specialized in third world politics as well as humanitarian, social and cultural issues, with a focus on “people and matters of the human heart.” Before moving to the Bay Area in 2008, he was the Director of Photography for the Salt Institute for Documentary Studies where he taught and mentored students. 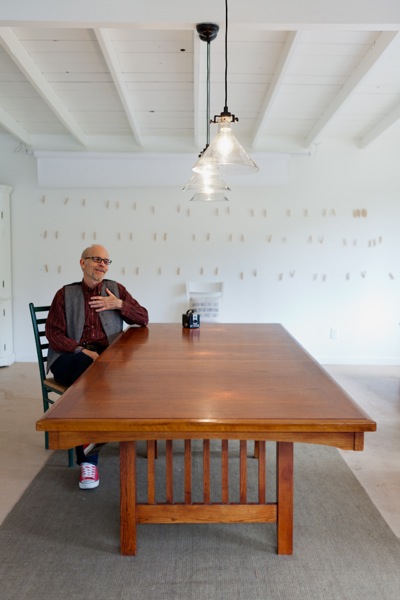 We stopped by Neal’s photography studio in Menlo Park to talk about his projects, what fuels his ongoing fire for his craft, and the workshops he gives to aspiring photographers.

In his mind, there are two kinds of photojournalism, the kind done by outsiders, who fly in to take photos of a disaster, as example. Then, there’s what he calls “insider stuff,” like the project work done by Brazilian social documentary photographer Sebastioa Salgado. “A project is an opportunity to be an insider,” he says, “to find something that’s important to you and to other people, to do something in depth. I have a million projects in my head, most of which won’t get done.” (Some of Neal’s past projects are shown on his website.)

Neal describes himself as a “generalist who’s mainly shot for other people.” He says he still gets a rush being in a large crowd, covering an event. “There’s all of that energy and competition.”

But, he equally enjoys two other photographic pursuits. One is spending time with an individual doing portraits. The other is teaching, which he does a far bit of — both at Stanford as part of its Continuing Studies class and giving workshops at this studio.

“I don’t get the rush with teaching, but I do get real sastisfaction,” he says. “I look back on my career and so many people took a chance on me. The idea of being able to give that back is really important to me.”

“As a teacher, I think of myself as a recruiter. At my most recent Stanford class, there were some people who really caught fire. They finished the class and began thinking of themselves as photographers.”

We asked him to chose one photograph (below) from his collection and to comment about it: 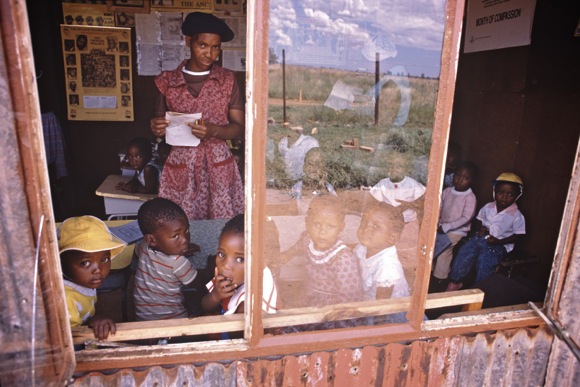 “This photograph was taken in South Africa. The location was at a squatter camp called “Orange Farm.”  It used to be a pig farm, and people were living in old tin or cement block shanties.  They ran their own schools and this is a grade school that is run out of an old farm building.

“The photograph was taken during Nelson Mandela’s release from prison. I was covering the story for the Christian Science Monitor.  I took a couple of days off from the politics and the large crowds of journalists that descended on South Africa at that time and rented a car to explore other parts of the country to see how everyone was living and what their attitudes were about the current events that had taken place.”

Photo by Neal Menschel courtesy of the photographer

I took Neal’s Portraiture class last fall at Stanford Continuing Studies and really enjoyed it. The experience of learning and sharing with others during critiques was very valuable to me. Neal’s a great teacher who shares his lifetime of work in photography very personally and effectively. And kudos to photographer Scott R Kline for capturing Neal so beautifully!

What a pleasure to meet Neal and photograph him. I admire his work. His studio was a dream to shoot in and, unlike most photographers, he was totally at ease in front of the camera. SRK

hi neil
it’s me jim from across from dominique’s new house. i absolutely love your work, and i see that you are friends with scott klein. scott took photos of one of our shows at a winery in south county and is friends with our former violin player stu wilson. anyway, i just wanted to say hi, and hope to see you in the neighborhood soon.