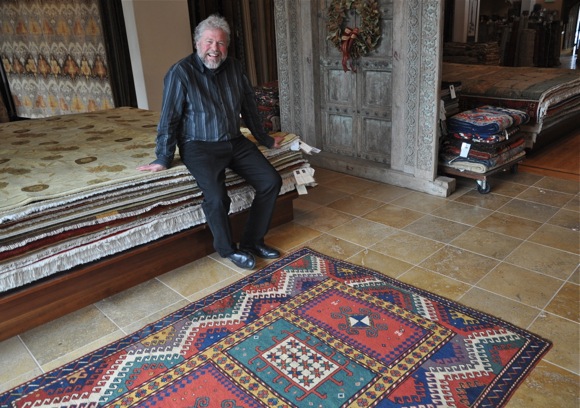 Editor’s note: Do you have a story of a treasured family heirloom? Or maybe a distinct way you’re using an heirloom in your home? We’d like to hear about it, send to tips[at]inmenlo.com.

Stephen Miller admits that when his customer unfolded the rug it “was little more than a rag.” He identified it as a Bordjalou Kazak from, most likely, the 1880s or 1890s. The customer had what she thought was a simple question, “Is it worth restoring?”

The answer, of course, is not simple. It revolves around not only the rug’s pre-restoration and post-restoration worth but its “value” to the owner. In this case, Stephen’s customer admitted that she felt that she’d inherited this rug — and others — to be a custodian, even though the person who made the bequest was clear about “selling them all if you want.” 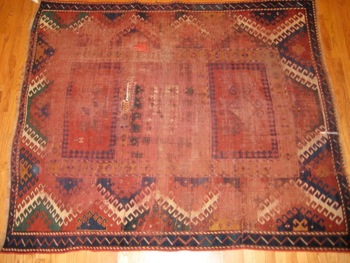 For over 35 years, she’d kept the rugs cleaned and had some minor repair work done. But this particular rug had once graced a well-trafficked space and was, by her own admission, “pretty threadbare.” So the question: “Toss it or repair it?”

“One of the things that intrigued me about this particular rug was the bold simplicity of its graphics,” Stephen said. “It was nicely drawn. Plus the presence of the purple color. In addition, while it was clearly worn, it was still totally intact. There was no dry or rotten areas in the rug. The foundation was there, and the design was clear and legible.”

Stephen’s customer indicated she had no desire to restore the rug in order to sell it. Her goal was preservation, so that she, too, could hand it on to the next generation. That fit nicely into what the Menlo Park rug merchant labels as “the Stephen Miller home for wayward rugs.”

“I love restoring good pieces,” he said. “I look for not only the potential of what they might look like, but how they used to look.” 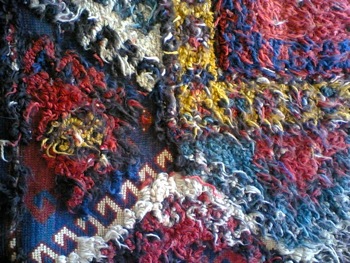 The particular rug, a Kazak that was hand-woven about 150 years ago in what is now Armenia, was sent to Turkey for repair and restoration. (Most rugs brought to Stephen at his Santa Cruz Avenue store are repaired locally.)

“The decision to send it to Turkey was because the repairs were so massive,” explained Stephen. “Not only are there far more weavers — allowing the workshop to weave more economically — but another reason is that we wanted to use old wool, to better replicate the fleecy quality of the wool that was originally used.

“In Turkey there is far greater access to old kilims, (flat-woven rugs), which are used as a source of the wool for knotting. These kilims are taken apart and the wool is re-spun and used in antique rug repair.

“All of the work was done by hand in the age-old method of hand-knotting. Because the warps and wefts of this rug were largely intact, most of the work consisted of re-knotting, which is literally tying a symmetric (or Turkish) knot using two warps with the shoot of pile coming down through the middle.” 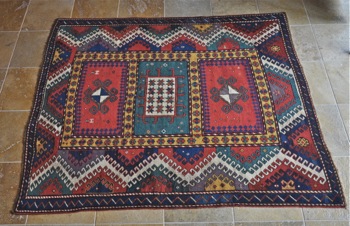 It returned no longer really an antique rug — there is too much modern work. At the same time, it came back to Menlo Park as a beauty.

“There are old rugs that are just that — old ,” said Stephen. “You just say ‘thank you for your service’ and let them pass into obscurity. And then there are rugs like this one, that as long as a caring owner agrees, they are well worth restoring.”

Note: Search the Internet, and you’ll find that rugs of this age and origin are now considered works of art, best preserved under glass or hung from a wall. Stephen’s customer is pleased that she can put it back on the floor, although not in a well-trafficked area of her home.