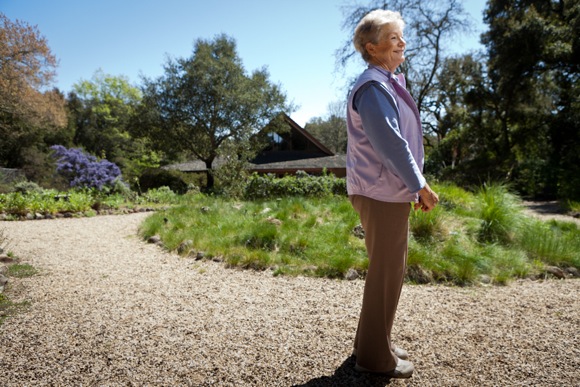 Tina Dreyer describes herself as a “collector of plants.” “I’d rather shop for plants than anything else,” she told her visitors standing in the middle of California Native Plant Garden, which she was instrumental in renovating about 10 years ago.

The Woodside-Atherton Garden Club transformed an unused plot of land into the Native Plant Garden in 1970. A long Garden Club member, Tina became president in 1999 at a time the Garden was showing its age.

“To me it was important to add more plants and fix the irrigation system, which had always been a challenge,” she said. “To accomplish that the Garden Club started a plant sale. We sell plants from our member’s gardens — and they have a lot of hard to find plants.”

This year’s plant sale is scheduled for Saturday, April 21, 10:00 a to 3:00 pm; the address is 3140 Woodside Road and a partial list of the plants that will be on sale is available online. 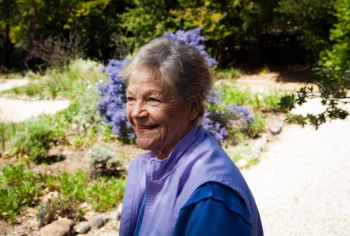 Tina worked with fellow Garden Club members Sarah Swinerton and Jessie Shilling and enlisted the professional help of landscape architect Ron Lutsko on the Garden’s renovation. Along with other members, they removed overgrown tress and shrubs and selected new natives that were planted in groups in adjacent beds to create a more natural setting. The underground drip irrigation system was replaced with micro-sprinklers.

A brochure developed by the Club has a list of all the plants in the Garden’s current 18 beds. “There’s a huge diversity of plants here,” said Tina. “And what’s interesting is the constant evolution among natives. For example if you look at live oaks, they sometimes have a little different shaped leaf, the result of cross pollination.”

Tina’s own garden is also full of natives, although she said she also likes to use Mediterranean plants that have adapted. “I’ve always been a gardener,” she said, “and remember my father’s Victory Garden during World War II. I spend an hour or so a day in my garden — it’s not very labor intensive.”

One highly-sought after non-native item will again be sold at this year’s plant sale — the so-called “Albion rose,” known for the street in Woodside where it grows up an oak tree. “People line up each year in advance for to buy it, but it’s really just one of  the many kinds of unique plants we’ll have for sale,” said Tina.