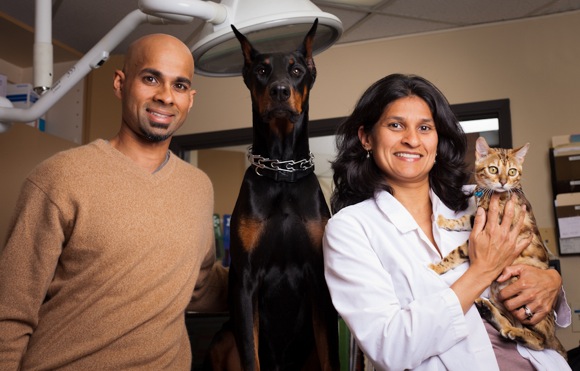 East Coast native Harish Narayanaswamy met South Bay local Husna Ulla at veterinary school at Tufts University in Boston. Once a couple, Husna began her campaign to get back to California. “It’s really the best,” she said in the office they share at Peninsula Pet Hospital, which they took over from longtime vet Dr. Charles Cortesi in 2009.

Known as Dr. Harish and Dr. Ulla, their path to becoming vets was a bit different. For Dr. Ulla, it was something she wanted to do since childhood. Dr. Harish came to the idea more slowly.

“I was always interested in science and studied microbiology at the University of Miami when I was an undergrad,” he said. “But it was my experience working at an emergency vet hospital during those undergrad years that got me interested in pursuing it a career.”

The two vets met Dr. Cortesi through a mutual acquaintance. With many vet practices becoming corporate, Dr. Cortesi very much wanted to keep Peninsula Pet Hospital a locally-owned, private practice with an emphasis on treating dogs and cats, and the couple filled the bill. The two vets are now completely entrenched in Menlo Park, having moved their family — three children, a Doberman named Anchor and Bengal cat named Kit Kat Candy — here in December.

“Living and working locally gives us great flexibility,” Dr. Harish said. “Between the two of us someone is available to pick up the kids.”

Veterinary practice has, of course, evolved over the years. Dr. Harish said that spaying is now done mainly laparoscopically, which “allows the cat or dog to be back to running and jumping around much more quickly.” He also performs ACL repairs as well as stem cell therapy on canine and feline joints.

As with most people, each has their canine/feline preference. “I’m the cat person and she’s the dog person,” said Dr. Harish.