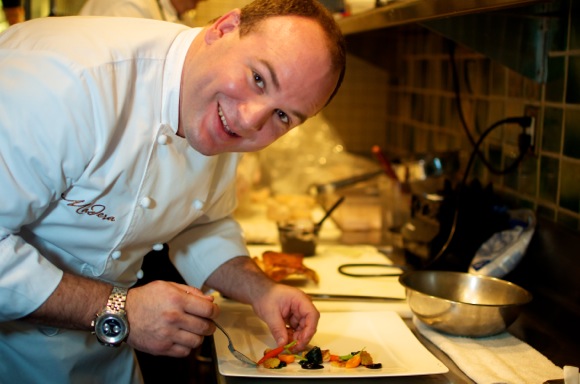 Growing up in Missouri, the expectation in Daniel Gomez Sanchez’s household was for him to become a doctor. “My parents are doctors and my sisters became doctors,” he said, sitting at a table in Madera Restarant, where he was recently appointed Chef de Cuisine. “My involvement with food was accidental. I wrestled in high school and during my freshman year in college. But, I got hurt and couldn’t wrestle anymore, so I got a job in the kitchen.”

After graduating from the University of Missouri (Columbia) with a degree in hotel and restaurant management, Chef Daniel moved to Barcelona to follow his culinary muse. “Barcelona definitely shaped my career,” he said. “I didn’t have anything else there except for cooking — no friends and no money. I’d go from kitchen to kitchen doing stage work. I knew I wanted to be an elite chef and Barcelona was my training ground.”

While there, he had the opportunity to work in the kitchen of Abac, the city’s notable Michelin-starred restaurant. Returning to the States, Chef Daniel honed his culinary skills in a number of high-profile Las Vegas restaurants before relocating to the wine country where he was most recently Senior Sous Chef at the Napa restaurant, Morimoto. Prior to that, he was Chef de Partie at both The French Laundry in Yountville and Cyrus in Healdsburg.

Chef Daniel thinks wrestling prepared him to be a chef in a couple of ways. “Both wrestling and being a chef take strong discipline that’s both mental and physcial,” he said. “Both require a high tolerance to the physical environment. You see a lot of ex-athletes in kitchens.”

He views Madera, which is located at the Rosewood Sand Hill in Menlo Park, as an excellent opportunity. “I came into a really great situation,” he said. “My job is to build on that, to work on consistency so that everyone who dines with us has a great experience.”

In putting together menus, Chef Daniel not only draws on seasonal and local ingredients, many of which are purchased at the Ferry Building weekly market, but also his Missouri roots and Barcelona years. “For example, I’m pairing Red Abalone with country ham that’s from my home state,” he said. “The garnish is Spanish.”

No kitchen tyrant, he is, like other elite chefs, a plating perfectionist. But, he says he tries hard not to let his ego get in the way of results: “The job is not to make myself happy but to make the diner happy.”