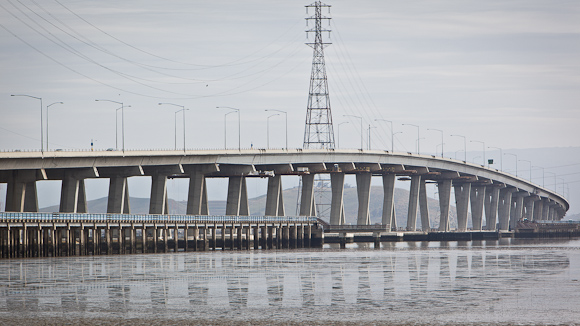 All six lanes of the Dumbarton Bridge, which links Menlo Park with Fremont, will be closed in both directions starting night, May 25, at 10:00 pm and ending Tuesday, May 29, at 5:00 am, to complete a major element of a seismic retrofit project. We thought we’d take the occasion to share a bit of the bridge’s history.

One fun fact — especially given all the hoopla surrounding the Golden Gate Bridge’s 75th anniversary celebration this weekend — is that the Dumbarton was the first bridge to carry automobiles across the San Francisco Bay, opening on January 15, 1927. Until the San Mateo Bridge opened two years later, it was the longest highway bridge in the world. It was privately developed and originally a drawbridge, a fact that long time residents may recall. 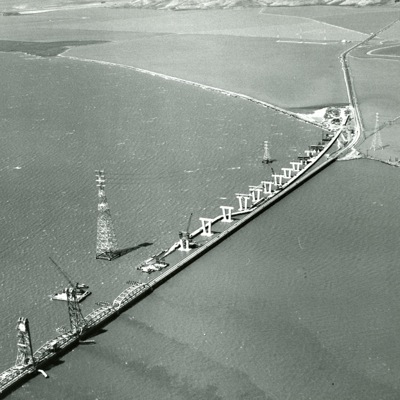 Purchased by the state in 1951 for $2.26 million, the original Dumbarton Bridge was replaced with a new one in 1982. It is 1.6 miles long and serves approximately 61,000 vehicles per day. (The photo at right shows the original drawbridge as construction of new bridge begins.)

The drawbridge portion of the old bridge was removed, with either end becoming fishing piers. While the Ravenswood Pier on the Menlo Park side was closed in 1994, the Dumbarton Pier on the east remains a popular sport fishing spot.

This weekend’s bridge closure is necessary in order for crews to replace the existing expansion joint on the western side of the bridge with a state-of-the-art seismic joint that will absorb and dissipate energy during an earthquake. During the closure, motorists should allow extra time for travel and use other bridges, including Route 237 and Highway 92 via the San Mateo Bridge.

While not accessible this weekend due to the closure, there are great views of the Dumbarton Bridge — along with excellent birding — from Pond SF2 in Menlo Park, part of the Don Edwards San Francisco Bay Wildlife Refuge.

On Oct 3, 1982, the day before the new Dumbarton Bridge was to open to traffic, I participated in the Dumbarton Bridge Run, a 7.5 mile course running across the bridge from west to east. I finished 127 out of about 2000 runners with a time of 51:45. Since the old bridge was closed and the new bridge was not yet open, it took my wife a couple hours to drive around the south Bay to pick me up on the Fremont side (and of course we then had to drive the long way back). At the time we were told this would be an annual run, but that never happened. I still get around to biking over the bridge occasionally–it’s usually pretty windy, but the views are great.