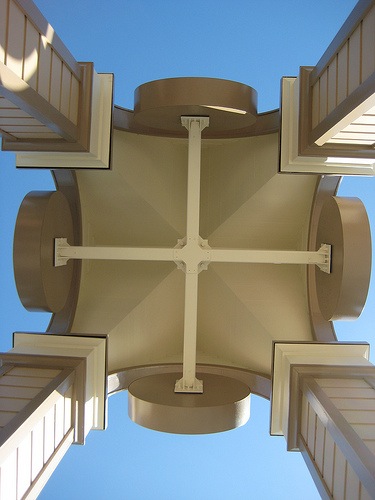 On a cloudless June day, about 40 locals gathered yesterday in the shadow of the Clock Tower at the Menlo Park Transportation Center. It was exactly 25 years ago that the Center was built to integrate rail, bus, auto, bicycle and pedestrian transportation elements in one central location.

The visually defining element of the Center is the Clock Tower. To maximize its visual effect, the Tower is purposely aligned as closely as possible with the center Santa Cruz Avenue.

At Tuesday’s ceremony, Gary Wimmer, representing Ford Land Company, spoke of the late Tom Ford’s love of the community and his passion for conservation as reasons for his donation of the funds to build the tower. Richard Campbell and Paul Bunton of Hoover and Associates related how the late Al Hoover, in designing the tower, chose a contemporary interpretation of a classical style with dimensions to blend with Menlo Park’s historic train station.

In 1987 Loren Brown had only recently joined his grandfather’s construction firm, Vance Brown Builders. The Clock Tower was one of his first projects. One of the more interesting complications of the construction was the clock itself, which was crafted by Elderhorst Bells, Inc. of Palm, PA, an old-world maker of tower clocks and bells, founded in Zoeterwoude, The Netherlands, in 1893. The design called for a four-faced clock of unique size operated and synchronized through four tubes suspended from above. After considerable discussion, delays, etc., the clock was delivered in parts, leaving the local construction crew the job of figuring out how to assemble it. That the clock has worked perfectly for 25 years is evidence that clockmaker and construction crew did a good job.

Other elements of the ceremony included 5-year old Sophie Cheung singing Tomorrow and additional entertainment by singer Gail Dobson accompanied by jazz pianist Martan Mann. In presenting the City of Menlo Park’s proclamations to the principals in the creation of the Clock Tower, Mayor Pro Tem Peter Ohtaki mentioned that the Clock Tower fits perfectly with the City’s newly adopted El Camino Real/Downtown Specific Plan, which envisions the train station and Transportation Center area as one of several principal people gathering areas. The 50th Birthday celebration in 2027 will be an occasion for reflecting on just how well this works out.