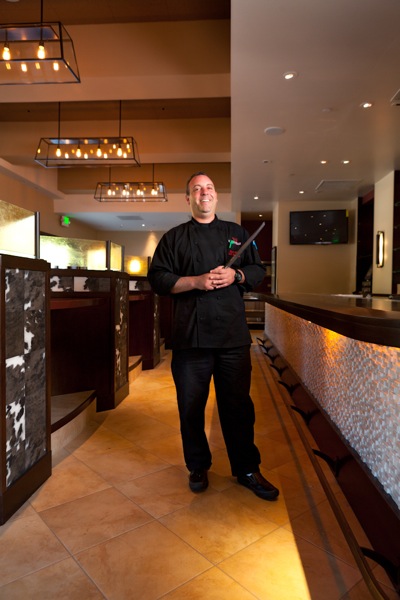 For chef Ryan Ellison, preparations for a new restaurant are 24/7. We caught up with him one early morning at LB Steak in Menlo Park — scheduled to open June 25 — where he was working on menu development with Master French Chef Joel Guillon. The pair have been together for the last three years at the restaurant of the same name at Santana Row in San Jose. Ryan is LB Steak’s Chef de Cuisine and brings a resume that includes Oliveto in Oakland (with Paul Bertolli) and a stint working in Hawaii, hence his familiarity with a range of food styles.

InMenlo: What prompted you to pursue a culinary career?

Ryan: I needed a job and told the owners of a little cafe in Los Gatos that I could cook. I actually could and ended up running the kitchen. From there I went to the Los Gatos Brewing Co. when it was run by Jim Stump who’d had experience at The Plumed Horse and Fleur de Lys. I learned a lot from him. You don’t need to have formal culinary training if you have a creative mind and understand flavor and texture.

InMenlo: What do you think LB Steak will bring to downtown Menlo Park?

Ryan: I haven’t dined at most of the restaurants here, but I think we’ll provide new choices, given our emphasis on prime meat and some of our signature dishes like the sashimi. Even though steak is in our name, we aren’t all about red meat. We sell more fish at the San Jose location than any other steak house in northern California.

InMenlo: What do you enjoy cooking when you can cook just for yourself?

Ryan: Anything related to a pig. I love cooking pork and learned a lot about how to cook it when I was in Hawaii.

InMenlo: What do you do in your spare time, given that there’s not much of it?

Ryan: I like to play tennis and cycle but what I do the most is study, which means reading about food trends and cooking. I’ve also gotten interested in Japanese knives. I had custom knives made for me in Japan. (Editor’s note, he’s holding one of his knives in the photo.)