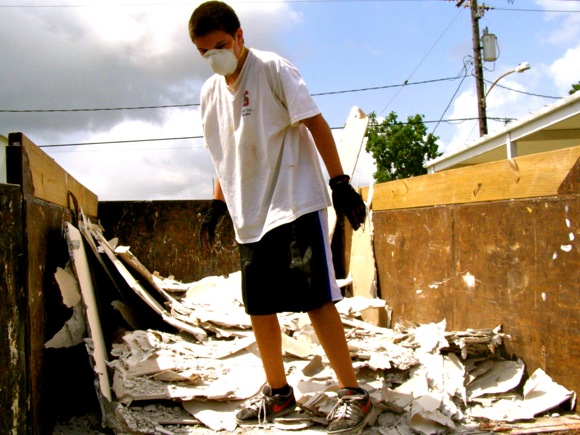 Editor’s note: This is a first in the series highlighting what local teens are doing this summer. Contributor Annalise Deal will be a junior at Menlo-Atherton High School in the fall, where she’s involved in the journalism program. If you know about local teens involved in interesting events or activities, please let us know at tips[at]inmenlo.com.

Seventeen teens from the Trinity Church youth group in Menlo Park returned home recently from a week-long service trip to New Orleans, where our eyes were opened by the work we completed — and the people we met.

We split into two groups during our stay, one working to remove Chinese drywall from post-Katrina houses (pictured at bottom) and the other to paint a house that will be used as a transitional recovery program for women coming off the streets of New Orleans. 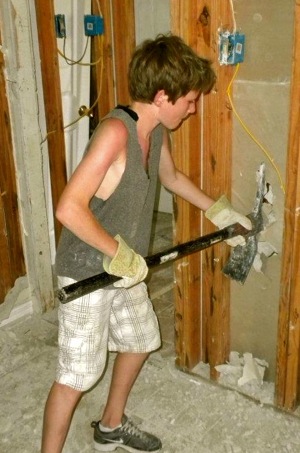 Those of us who worked at the Chinese drywall house were moved by the story of Miss Valerie and Mister Darrell, the recently retired homeowners. As a result of Hurricane Katrina in 2005, their house flooded with five feet of water and needed to be completely rebuilt.

The contractor who built their house, and many of their neighbors’ homes, used drywall imported from China, which contains low levels of sulfur. Over time, this drywall can corrode nails, plumbing and electrical wires as well as cause health problems. Miss Valerie had already begun to get sick and was in need of help in order to not lose electricity and plumbing. Though the work was hot and grueling, we were moved by the couple’s story, and their patience, motivation, and hospitality as they worked along side us.

The other half of the group continued the work that the teens began last year during their service trip to Nashville. The house they painted in New Orleans, called Eden, was inspired by Nashville’s Magdelene house, which serves abused women who have fallen victim to addiction and prostitution. Those who participated at Eden were motivated to work in the most precise and beautiful way so that the women would feel as if they have a home that honors them.

We came away moved by the continuing impact Katrina has on the city, as we worked in neighborhoods turned upside-down by the flooding and then brought back together by family ties and incredible sense of community.  We were struck by the optimism of all the people we encountered. 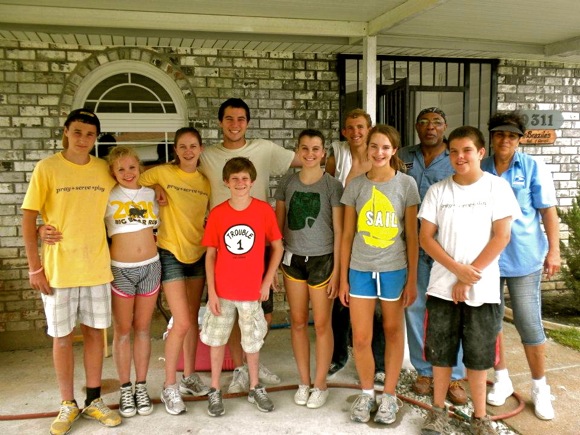 This is our story(above), I cannot tell you how deeply touched Joseph and I are at these amazing teens and group of folks…..just truly one of the best stories that I have seen as of late. The photos, are so eerily similar to our real life experience right at this very moment. That is extremely hard work, extremely hard and tedious. Fighting for what is right though is always hard work and this is actually getting in there and getting your hands dirty. God has truly touched you folks, doing this for the Victims of this horrific tragedy. I only posted our story so that you may see the similarities , we were shocked and amazed when we saw this. This has made our Day this morning on this Sunday, the day the Lord has Made….all of you Rock !!! Sincerely, Joseph and Julie Mraz Jr.