Nat Lewis is a man of many hats and talents – teacher, sculptor, musician 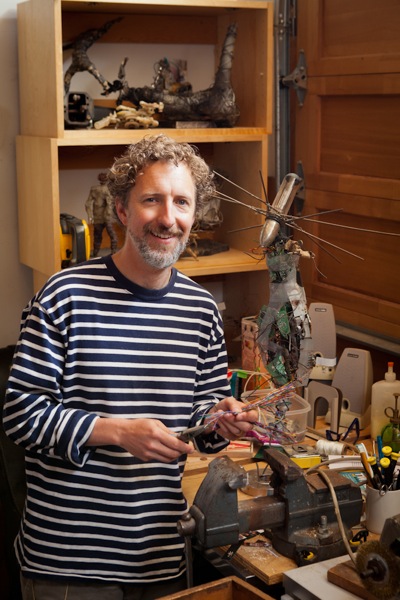 The question “what/who are you?” surfaced early in our conversation with Nat Lewis. We’d heard he was a bluegrass musician who happens to also teach at Menlo School. And then there’s his work as a sculptor.

After modestly deflecting that he doesn’t feel “like I do anything supremely well,” he admitted to be first and foremost a teacher. “I’m good at it,” he said. “But it’s all relative. People like the sculpture, but I haven’t done a gallery show for years. People like the music, but there are many, many people who are better.”

Nat, who started on guitar and French horn when he was a teenager, views himself primarily as a church musician. He played at All Souls Episcopal Parish in Berkeley “when there was a need for alternative music” and where the rector introduced him to bluegrass. Moving to the Peninsula, he joined Trinity Church in Menlo Park, bringing along the banjo his grandfather left him as well as his guitar, most recently playing bluegrass at an outdoor Sunday morning worship service.

While at UC Santa Cruz, Nat started sculpting and continues to maintain studio space in his garage (where he was photographed). “I did stuff in college, had a couple of gallery shows, and then became a teacher,” he said. “Being a sculptor is a dicey profession. Teaching is hard but worth it.”

He is currently working with some people at St. Cyprian’s in San Francisco to create a sculpted altar cross for that parish. “It’s a nice project because crosses are a set format, not a huge leap,” he said.  “It’s not like I have to create something out of whole cloth. It’s more a spiritual discipline.”

Clearly a person with fully working both right and left brain, Nat teaches 8th grade math at Menlo School. “I enjoy it, it’s awesome” he said. “I was very fortunate to be grabbed by Menlo when we moved from across the Bay. I have lots of freedom and the staff is very professional. Math is all around us —  it’s all about making connections and doing cool stuff.”