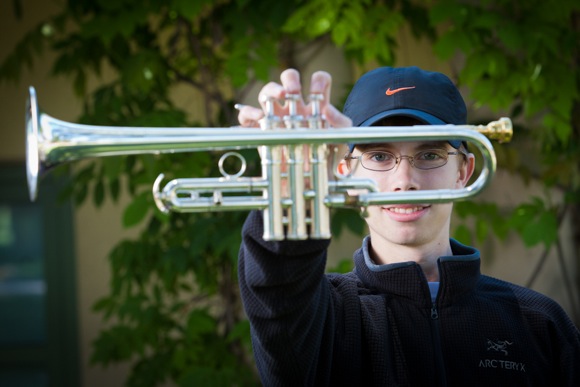 Sometime you come to talk about music and the conversation turns to iPhone games. Such was our discussion with Kai Banks held during the Summer Brass Institute currently taking place at Menlo School.

An accomplished trumpet  player, 16-year-old Kai just returned from touring New Zealand with the California Youth Symphony, where he serves as co-principal. “We switch off playing first trumpet,” he said of his involvement. “We had 130 musicians on the trip and filled all the stages. It was fantastic.”

Kai was inspired to take up the trumpet by his cousin, a proficient player, when he was in middle school. He attends Menlo now and chose the school because of its orchestra. He takes private lessons from Jim Dooley, who plays with the San Jose Opera Symphony. “At this point, he’s my inspiration,” Kai said. “I love the way he plays and sounds.” 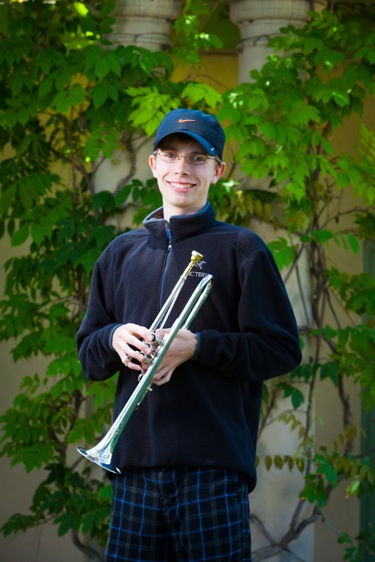 While his preference is performing big orchestral works, Kai is looking forward to his Summer Brass Institute appearances this weekend where he’ll be playing as part of smaller ensembles. He’s appearing Friday, July 13 at 8:00 pm with other SBI participants and will be featured in two Debussy pieces for brass septet arranged by Menlo School Orchestra Director Vicky Greenbaum . On Saturday, July 14, also at 8:00 pm, he’ll play first trumpet in Boehme’s Sextet for brass. Admission is free to both performances, which take place at Stent Hall on the Menlo campus.

Given his success as a musician, we were waiting for him to reel off the names of  top music schools in the country when our talk turned to college. Instead, he told us that MIT was first on his list. “I’m really into computer science,” he said. “I’m doing an internship this summer for Make Games With Us, which is run by Menlo alums. I’m using objective C to write a game for the iPhone which I hope I’ll have done by the end of the summer.

“MIT does have a music program, too. I’m also thinking about Stanford. My dad played in the Stanford Band when he was there, and I think it would be really fun to be in that band!”