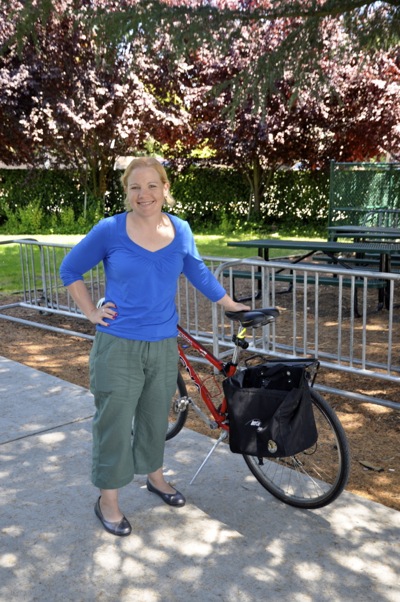 There’s a new force in Menlo Park and Atherton, and her mandate is to change the way you transport your kids to school. Local resident Kathy Schrenk, who’s children attend Encinal and Laurel Schools, has been named the Traffic Safety Coordinator for the Menlo Park City School District. She’s using the summer to plan how she’ll approach the increasing problem of parents driving their kids to school — often one to a vehicle — rather than biking, walking, carpooling or taking the bus.

“I’ve been passionate about this for a long time,” she said amidst the currently empty bike racks at Encinal School. “I’ve taken my own kids to school on my bike since they were in preschool.”

For Kathy, that meant cycling one child to Encinal and then going home to pick up her youngest  for the ride up to University Heights Montessori School near the Alameda in west Menlo. (And yes, Kathy cycled to her InMenlo interview.)

“There are many reasons why people get their kids to school the way they do today,” she said. “Working parents drop their kids off  before going to work. Some of these parents say it’s a time for them to spend a few quality minutes alone with their child.”

Over the summer, Kathy plans to learn about the challenges of abandoning car transportation to school in favor of walking/biking/taking the bus. She knows that each neighborhood is different. “There’s a bus that picks up kids in Suburban Park, which doesn’t’ have easy walking routes, that is very popular,” she said.

“I want to recruit volunteers in every Menlo Park and Atherton neighborhood and put in place software that will help parents set up groups their kids can use to bike and walk to school — or form carpools. I also want to get people’s input about safe routes.”

In Kathy’s opinion, it’s not fear of crime that’s fueled the one parent/one child/one car current mode of school transportation. “It’s more fear of the traffic,” she said. “Parents are afraid if they don’t’ take their children to school by car to school, they will get hit.”

That one parent with one child in a car causes further traffic congestion, of course, begs the question.

Kathy will be at the Menlo Park Downtown Block Party at the bike commission booth on August 15 and also welcomes input via email: kschrenk[at]mpcsd.org.