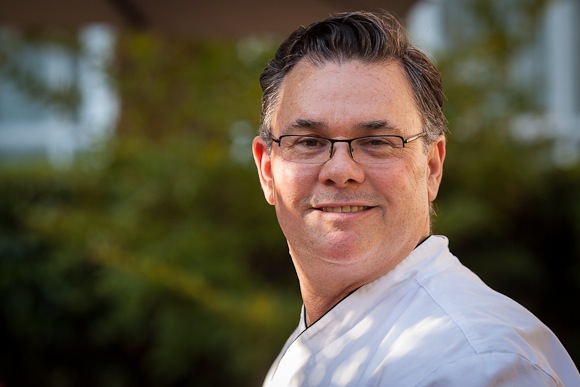 It was about a year ago that the restaurant at the Stanford Park Hotel on El Camino changed its name from the Duck Club to Menlo Grill Bistro & Bar. In its latest incarnation, the name stays the same but a revamped menu shows off the culinary talents of the new Executive Chief, Chuck Courtney, who’s headed restaurants up and down the West Coast.

“I’ve always loved cooking,” he said, “but for years made a living selling print advertising. I’d watch Great Chefs on PBS and enjoyed seeing the different kitchens and approaches. In 1996, I decided to go to culinary school and attended Western Culinary School in Portland, Oregon.

“When I started school, I had all kinds of ideas about what type of food I’d like to cook, although I thought it would be casual. But, most of my major restaurant experience has been cooking modern American, which encompasses a lot of cooking styles and techniques. 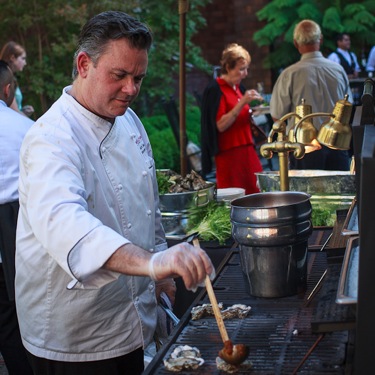 “I’m still learning and changing directions. If you ever think you know it all in this business, something comes along to show you that you don’t.”

For the Chef, this is a return to working for an ownership property he knows well. He headed the kitchen at Bistro at the Park across the Bay in Lafayette for five years, which is also owned by Woodside Hotels. Under his direction, the Menlo Grill is offering a number of new dining options, including a Thursday summer outdoor BBQ, a “lunch break” served with a cookie in a to-go bag, and a Sunday supper featuring prime ribs. New on the menu are cheddar chive biscuits, California panzanella salad, “lobsta'” roll, New York steak with red wine sauce, and Berkshire pork chops with applejack barbecue sauce — all of which were offered as samples at a reception on the outdoor patio last week.

“I grew up in Los Angeles and really loved working on our new summer menu,” Chef Courtney said. “It brings back good memories.”

We’re always curious about what chefs do in their off hours, given that they are few. “I love to go camping,” said the Chef. “I have an old Dutch oven that was my grandmother’s. I enjoy making an apple tartine on coals in the fire pit.”