Menlo Park resident Ted Huang discovered his Olympic sport, wind surfing, thanks to a bit of serendipity. “I grew up in the South Bay, and my Dad was an aeronautical engineer but had a side job importing products from Taiwan,” he recalls. “One of his friends asked if he could add some windsurf boards to the container.

“I was 11 years old and had been doing the typical piano and violin thing, but those boards really got my attention. I started out on Lake Lagunita [on the Stanford campus] and moved on to Foster City Lagoon, where another windsurfer spotted me and invited me to join a racing team. I was like 12 years old and the youngest by far. I would hang on for dear life and beat the big kids. Everyone called me ‘little Teddy.'”

Ted was among the top-ranked American windsurfers during his late teens and early 20s. He came in second to his arch-nemesis in both the 1992 and 1996 windsurfing Olympic trials, and with only one windsurfer going to the Games, Ted faced a tough decision when Taiwan approached him in 1996 about representing his parents’ homeland. 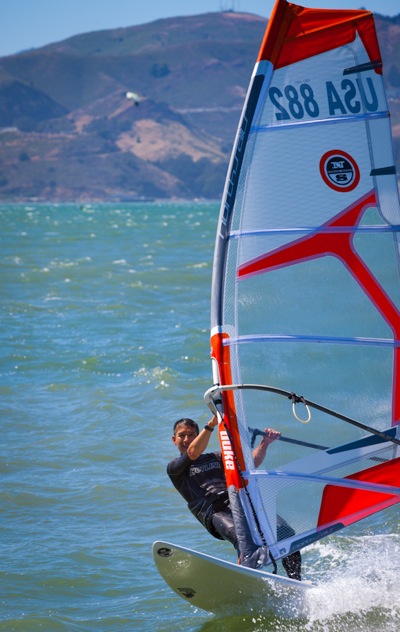 “I was really torn, as like other American athletes, I’d always dreamed of representing my country,” he says. “But in the end, I resigned from the U.S. National team and competed in the games for Taiwan in both 1996 and 2000. (Ted placed 9th and 12 respectively.)

Today, Ted can be found atop a bike much more frequently than on a windsurfing board. He gave up the latter sport “cold turkey” after the 2000 Games. “Windsurfing is a loner sport,” he says. “I like the camaraderie of cycling. I went windsurfing for the first time in a long time when Scott photographed me for InMenlo.”

Through cycling he met his wife Christine Thorburn, who was a member of the U.S. cycling team at the 2004 and 2008 Olympics. For many years, he raced for Webcor, where he also works, but as he explains, “I hung up my cleats in 2009 and haven’t raced since — and don’t plan to do so in the future. Racing is just such a slippery slope.”

Apart from his athletic accomplishments, Ted is passionate about sustainability and is active with the environmental group Acterra. He also founded a cycling advocacy group called Give A Little, which reminds cyclists and motorists to do just that.

“Windsurfing was a tremendous gift to me,” he says. “On the U.S. National team, I traveled around the world to take part in competitions. It helped me gain what I call ‘street smarts.’ You learn to be diplomatic — you’re an ambassador for your country and your sport.

“I really want to give credit to my parents, who provided me with tremendous support. They always told me, ‘If you’re going to do something, do it to your fullest and never quit.'”