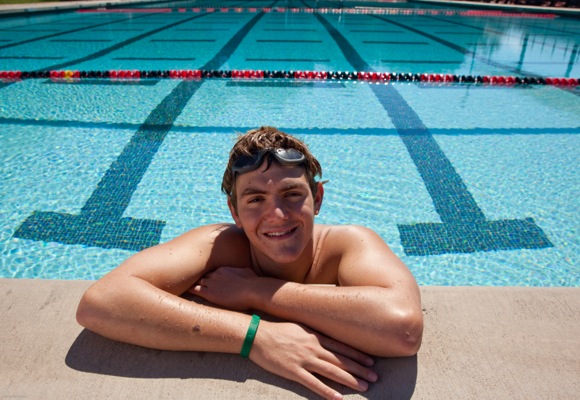 When Menlo Park resident Joe Wise was diagnosed with mitochondrial disease at the age of 9, doctors told his parents he wouldn’t live to see age 15. Instead, at the age of 15, he swam in the Beijing Paralympics, placing fifth in the 400-meter freestyle.

Then, after graduating from Sacred Heart Prep in Atherton in June, 2011, he competed on the Division 1 Loyola University Maryland swim team. And now he is in London participating in the  2012 Paralympics that run through September 9. It’s his Loyola coach, Brian Loeffler, who helped him prepare for the current competition.

Besides world-class swimmer, college student, friend, son, and brother, Joe is also is a spokesman, an ambassador, an inspiration, and a role model. And someday he hopes to add attorney to that list, specifically a disability rights lawyer or lobbyist who will fight for kids who can’t.

Prior to his diagnosis, Joe was an athlete, excelling at baseball. Then his parents noticed that he was running awkwardly. When he got the diagnosis of mitochondrial myopathy, doctors told him he wouldn’t be able to run; he’d have to give up the only sport he really loved.

The severe muscular disorder affects Joe’s legs, hips, core muscles, and lungs. He uses a ventilator twice a day — at night when he sleeps and during the day when he naps — because his diaphragm muscles are weak and he can’t blow out CO2.

Joe credits his Santa Clara Swim Club coach, John Bitter, and his strength coach, John Mullen, for keeping him strong. He also has an amazing team of doctors at Stanford Hospital that Joe says has “kept me going for nine years.” But anyone who knows Joe knows that its determination and hard work which are really the key factors.

Information about mitochondrial disease is available from the organization MitoAction.