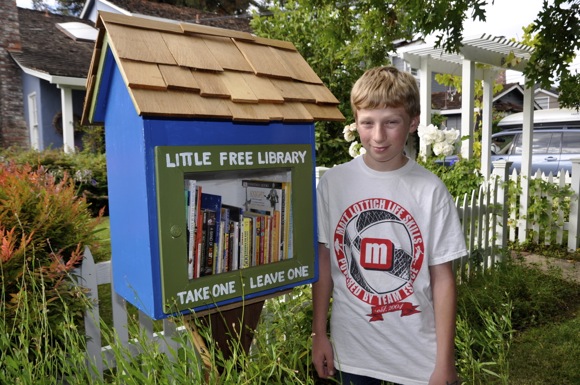 Hillview School 6th grader Russell Ives is a self-described “lifelong dedicated reader.” So, when two of his key sources of reading materials — Kepler’s and the Menlo Park Library — were both closed, he decided to open up a neighborhood “little lending library.”

“It’s not super serious,” he says. “It’s on the honor system. You take a book and leave a book.”

The library is housed in a bright blue box at 648 College Ave. in Menlo Park. Russell and his parents got the building plans from Little Free Library. The website lists about 600 neighborhood libraries around the country, including a couple on the Peninsula.

The type of available books at Russell’s library shifts. “A couple of books my mom added wouldn’t interest kids, like a cookbook featuring chocolate,” he says. “Kids like chocolate but they don’t want to read about it. I like to offer story and chapter books that elementary and middle school kids want to read.”

Russell says he mainly reads “big books” with fantasy and adventure story lines. “I really don’t have any particular favorites. This past summer I got into graphic novels and comics.”

There is talk about expanding the number of free little libraries to other part of Menlo. “We’ve talked about having people come over and building new libraries,” says Russell’s mom, Barrett Moore. “We think the concept is great!”