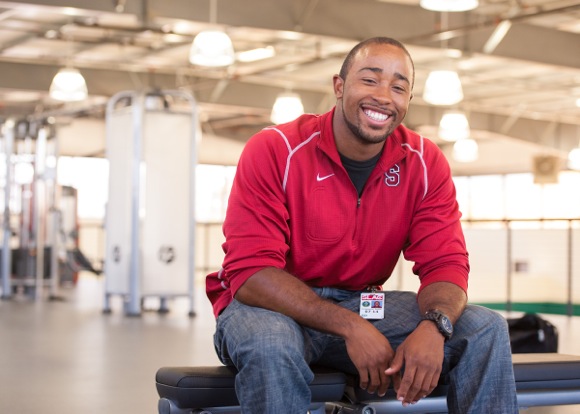 The new Arrillaga Recreation Center at SLAC in Menlo Park in managed by Chris Spells. We caught up with him behind the reception desk, where he spends much of his day checking in people at the fitness center, tracking equipment orders and gathering suggestions for improvements.

Welcome to SLAC. We’re going to let you introduce yourself.
CS: I am a true Californian. I grew up in southern California, the city of Corona to be exact, where I went to Chino Hills High School, and was a dual sport athlete. I was a defensive back on the football team, and my favorite sport to watch and play is still football. I also ran the 400-meter dash and was a captain of the track team.

By the way, I am a huge Chicago Bears fan, and truly believe we shall win the Super Bowl this year. I just had to throw that in there. [Update: when asked by the InMenlo editor, “Why Chicago Bears, given your SoCal roots?,” Chris explained that the offense on his high school team was similar in some respects to the often unproductive Bear.]

Good to know.
CS: I’m a recent graduate of Fresno State; I graduated in June of 2011 with a bachelor’s degree in kinesiology with an emphasis on sports administration.

Sports administration? That sounds like more like an MBA.
CS: We had a lot of business classes. The degree is basically a bridge between sports and business, but the good thing about the kinesiology part of it is that it’s still the same base of classes that teachers, coaches or athletes take. It’s really equipped me to manage a facility like this.

You mean like the sports medicine classes?
CS: And biomechanics and wellness. This degree also gave me a lot different view of what I’m watching when I turn on ESPN, too. (Laughs.)

How did you get from Fresno to SLAC?
CS: After I graduated I started an internship with Stanford where I attended meetings during the week – to watch and learn – and worked events as they came about. It blossomed into many work weeks of over 40 – even 50 – hours. I was the head event manager for the softball, wrestling and men’s volleyball teams. This is technically my first full-time job, but I have to tell you there are a lot of events at Stanford Athletics. Last November was the busiest month of my life.

Now you’re taking it easy behind a desk.
CS: (laughs) Not for long. When things settle down I’d like to be more hands-on. I don’t want to just check people in. I want to be roaming around, answering questions, helping people. That’s what we’re here for.

Footnote: Following this interview by SLAC reporter Lori Ann White, we asked Chris what he does to stay fit. “I like to go the gym,” he replied. I also ride a bike recreationally and just participated in the Eye-Q California Classic, a 35 mile ride in Fresno.”

To the question, what is the last best book you’ve read, he answered:  “The 48 Laws of Power by Robert Robert Greene. He talks about managing people and dealing with people in thework place and social life. What’s great is how he connects the past and present.”