Shocking aftermath of supernova explosions is topic of SLAC public lecture on Nov. 27 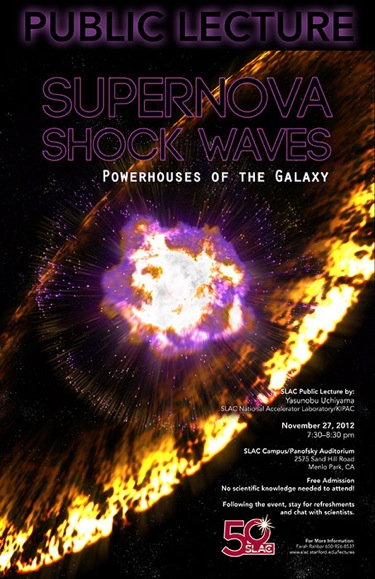 Yasunobu Uchiyama, a scientist with the Kavli Institute for Particle Astrophysics and Cosmology at SLAC in Menlo Park, will deliver the Nov. 27 SLAC Public Lecture, “Supernova Shock Waves: Powerhouses of the Galaxy.”

Uchiyama’s talk begins at 7:30 p.m. in Panofsky Auditorium and will highlight the powerful remnants of exploding stars, called supernovae, which are among the universe’s most spectacular pyrotechnics displays.

For thousands of years after a supernova explosion, massive orbs of high-energy particles with strong magnetic fields remain confined by the expanding shock wave. These remnants “are among the most beautiful and mysterious objects in the cosmos,” notes Uchiyama, a member of the Fermi Gamma-ray Space Telescope Large Area Telescope collaboration who has expertise in supernova remnants.

SLAC Public Lectures are free and last about an hour. Refreshments are served after the lecture, when guests have an opportunity to speak with the presenter. This year’s public lecture series commemorates SLAC’s 50th anniversary and will include talks highlighting discoveries that lie ahead for research at the laboratory.