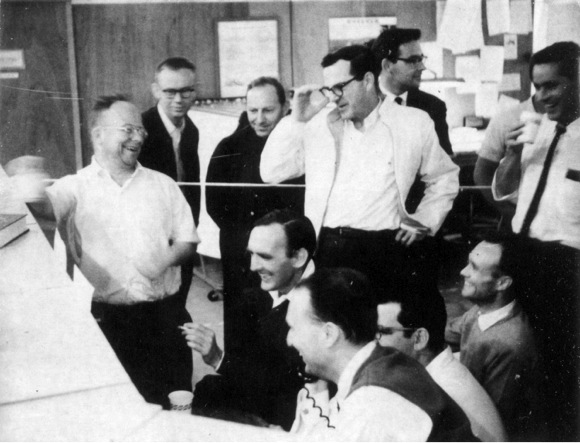 Neal, who retired from SLAC in 1985, was part of a small group of visionaries who met in 1957 in the home of Wolfgang “Pief” Panofsky, who would later become SLAC’s first director, to discuss preliminary plans for building a giant linear accelerator, then dubbed “Project M.” The “M” stood for “monster” because of its scale.

“Dick Neal was Mr. Everything,” recalled SLAC Director Emeritus Burton Richter during a 1997 symposium honoring Neal’s 80th birthday. Neal was, in effect, the project manager for the accelerator during its design and construction, Richter said, and later was responsible for the operation and maintenance of the machine.

He was appointed associate director of SLAC and leader of its Technical Division after Congress authorized the project in 1961, and was also a member of the SLAC faculty.

Neal chronicled the systems and components of the linac as the lead author of a 1,169-page work, “The Stanford Two-Mile Accelerator,” that is also known as “The Blue Book.” That book serves as a lasting tribute and valuable reference for the innovations and expertise in technology and engineering brought to bear in constructing the linac, which continues to power cutting-edge research at SLAC decades after its completion in 1966.

Greg Loew, deputy director emeritus at SLAC and a longtime colleague and friend of Neal, said, “Dick was really the architect of building the accelerator. If you look at the machine, the imprint of Dick Neal’s work is everywhere.”

Loew recalled Neal’s calm demeanor, dedication to his job and attention to detail.

“He was an incredibly good teacher, a very good boss. He never got angry,” Loew said. “He was very constructive, super-patient. There wasn’t a person at SLAC who wouldn’t consider him an absolute gentleman. He was a friend, he was my mentor. If I had a problem, I went to him.”

Neal would often work 12-hour days, and even after the accelerator’s construction, his job was filled with the near-constant troubleshooting and upgrades that the linac and the lab’s scientists demanded.

Panofsky and Neal “got along famously,” Loew said, and “Panofsky really, really respected him. Panofsky was always grateful to Dick for his many contributions to the lab.”

Neal’s daughter, Martha “Marti” Neal, said Loew and Panofsky were among the friends who kept in touch with her father after he retired and moved to the San Diego area.

“My father was an idealist, kind, unassuming, honest and loyal, quiet, cool, calm and collected and was dedicated to his job at SLAC,” she said. “He always tried to maintain an open-door policy in his office and lived by the Golden Rule.”

Neal’s son, Richard F. Neal, of Bonny Doon, Calif., said, “He highly valued and cherished the personal and professional relationships that he had within the SLAC community and always emphasized that the many notable accomplishments made during those years were due to a remarkable team effort in which he felt that his role was small.

“Throughout his career, most late nights he could be found working in his small study at home on myriad administrative, technical and budget details,” he added. “He was a modest, soft spoken, highly ethical man, with a devotion to his work, to the practice of science, and imbued with an abiding respect for his colleagues and associates.”

Born Sept. 5, 1917, in Lawrenceburg, Tenn., Neal graduated from the United States Naval Academy in Annapolis, Md., in 1939, where he excelled in track events and played football.

He served two years aboard the battleship U.S.S. Pennsylvania until his discharge in 1941 for a defect in his eyesight.

He then served as a field service engineering supervisor for New York-based Sperry Gyroscope Co., which was then involved in high-power microwave research, including the development of the first klystron at Stanford University. Klystrons later became the power sources for linear accelerators.

After working on rocketry systems for Sperry at the close of the war, Neal left to attend Stanford as a graduate student in 1947. He worked on a series of linear accelerators at Stanford and in 1953 published his thesis, a technical report about Stanford’s 220-foot-long Mark III accelerator project, a precursor to the 2-mile-long accelerator. He became a physics research associate at Stanford in 1951.

During his career he authored many technical papers and participated in numerous committees related to accelerators.

After moving to Southern California, Neal took an active role in managing the finances for his homeowner association in Solana Beach.

Neal had taken up flying as a hobby during his time at SLAC and acquired a pilot’s license, and Loew recalled that Neal would on occasion fly over the lab. Marti Neal said his hobbies also included ballroom dancing, ice skating, cycling, hiking, music, reading and spectator sports.

She said, “We all miss my dad tremendously but are happy for the long, fulfilling life he had and his many contributions to Stanford over the years. He was quite a leader and a wonderful father and friend.”

Neal is also survived by his wife of 68 years, Gail Annette Neal.

To commemorate his retirement in 1982 as director of SLAC’s Technical Division, Neal planted a silk tree near Building 41, where it still grows.