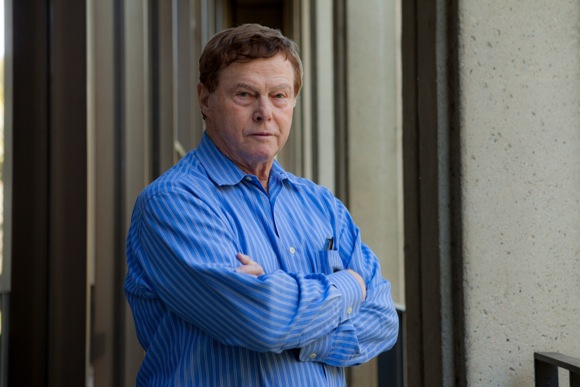 By his own admission, crime novelist Joe McNamara “fights a propensity for neatness.” Hence the papers covering nearly every inch of his office at Hoover Institution, where he is a Fellow.

That doesn’t keep the Menlo Park resident from quickly finding exactly what he’s looking for. You immediately get the sense that not much gets by this eagle-eyed former Harlem beat cop — age (77) and health issues (heart and cancer surgeries) aside.

Joe’s fifth cop novel, Love and Death in Silicon Valley, was published earlier this year. He used the occasion to republish his four previous books.

“One of the interesting things about our country,” he said, “is that I’ve received more compensation from my five novels than I did in 35 years of police work.”

While still a beat cop, Joe got tapped to attend Harvard Law School. He has a PhD from Harvard, so while he did serve as Chief of Police at two large cities — San Jose and Kansas City — he’s not your typical career law enforcement officer. 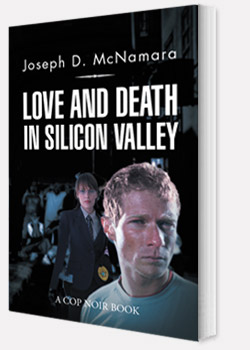 “One of the reasons I became a novelist,” he said, “is that I couldn’t sleep at night. So, I’d get up and write.

“When I was a Chief in both cities, local newspapers asked me to write book and movie reviews. That jelled with my belief that it’s important for police to be part of the community. Given that forum, you can speak directly to the public.

“Plus, cops have a lot of stories to tell. And, there’s a lot of public interest in those stories. Think about it: How could you have TV without cop stories?”

Joe’s first book was published while he was still the San Jose Police Chief and that put him in the position of constantly denying that any of his characters were based on real people. “The diversity of police is remarkable and while I did use composites, there was never a single person,” he said.

In Love and Death in Silicon Valley, the main character finds himself mysteriously a victim of an assassination attempt after he’s retired as sheriff. “He starts looking everywhere for help, but gets none, so he starts to think of a preemptive strike against the gangster who tried to murder him,” Joe said.

“A lot of the book is based on my research about the drugs wars. Right on our borders, the drug cartels are winning. So, it’s not imagination that cops can be drawn into preemptive strikes.”

Joe believes that his cops — and cop characters in novels written by other cops — are more realistic than those written by people not involved with law enforcement.  “My books have more politics than a lot of other cop novels,” he said. “That because of all those years in the administration. You’re always in a balancing act — heading the force and dealing with all the politicians. It’s a constant juggle and it’s good to remind people of that fact.”