Menlo Park gets “first of its kind” interactive Christmas lights, courtesy of David Barshow and crew at MPPC 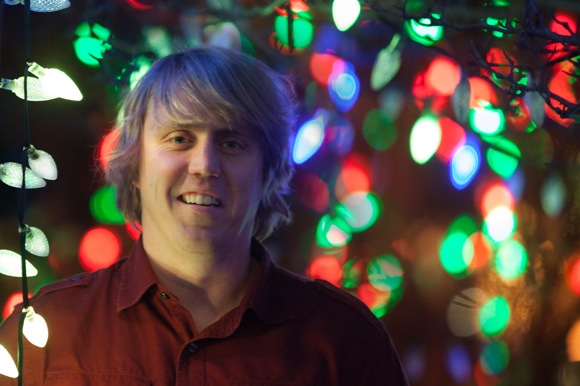 Be prepared to be dazzled, not to mention transfixed. The trees in the front courtyard of Menlo Park Presbyterian Church (MPPC) on Santa Cruz Avenue have been decked out with 12,000 LED Christmas lights that sparkle nightly from 5:30 to 10:30 pm.

“This is the first of its kind of display — and it’s right here in Menlo,” said David Barshow, the person credited with the idea and design. “You can control the lights around you using a smart phone (iPhone or Android). Just make sure you have GPS enabled.  Go to olightdivine on your smart phone for control.”

David, who was on the staff at MPPC from 2007 to 2011 and is now the volunteer lead tech for the Sunday night Sanctuary service for young adults, pitched the idea to church administrators in September.

“I didn’t think it would happen this year, even if approved,” he said. “But, I got an almost immediate ‘go’ and then the work began.”

David collobarated with a team of about 20 volunteers to make it happen. They sampled lights from various manufacturers, and once the light strings were selected and purchased, they assembled the control boards. Then, they programed the software to control the control boards.

“It probably took close to 700 hours to prepare everything,” said David.

The payoff is a great light show for the whole community to enjoy. “It’s fun,” said David. “You run around, and the lights follow you. Kids really love it.”

As locals become more aware of the interactive display and come down to see it, smart phones in hand, we were curious about what happens when there are more than one controller.

Replied David: “You control the lights around you, so if two people are in the same area, their effects fade together. If one is red and one is blue, the result would be purple.”

Note: Sanctuary is hosting The Concert Before Christmas on Sunday, Dec. 16 at 7:00 pm, “that’s fit for the whole family.”

In light of all the economic distress and needs in this country and the world, it’s nice to know how Menlo Park Presbyterian Church is on the cutting edge of spending 700 hours and thousands of its dollars to be a brilliant interactive light in its community. Just what the poor and hungry need to be filled!

MPPC has been contributing to the poor and hungry for years. Whether financially, through its programs, or via volunteer hours MPPC has helped the community for decades. The sarcastic comments are neither helpful nor necessary. What are you doing to contribute to those in need?

Good for you, Elizabeth, and I ask as well, What have you done to help the needy? There is so much gloom and doom in the world today, (including your unnecessary post), should we stop celebrating life and all be miserable? Would that make you feel better? It wouldn’t do anyone any good to become a Scrooge. How about celebrating some blessings in life, they are out there, just ask God to show you, you do know Jesus, don’t you?

These lights are truly amazing. David Barshow is an extraordinary human being and I am blessed to know him.