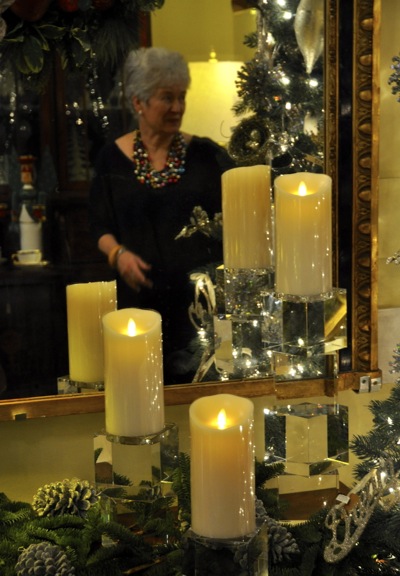 We ran into Joan Sanders — who last year took us on a tour of her wonderful garden — in downtown Menlo Park earlier this week. Joan works on Fridays at home decor store Quintessence on Santa Cruz Avenue. The store is known for its seasonal decorations, with Christmas currently taking center stage.

Joan was excited by a type of candle the store is selling. Called Luminara, they are real wax candles with a battery-operated flcikering “flame” — one that you can touch without getting burned.

“The heat from the bulb moves the flame,” explained Joan, when we stopped by the store. “And they come with a timer, I have mine set so they come on at a certain time each night and go off five hours later.”

Joan also suggested that the candles would be perfect for what she’s long called “Candlelight Tubby.” “That’s when ‘The Children’s Hour’ has arrived — that time in the late afternoon or early evening when you need something to calm the kids down. In my house we called it Candlelight Tubby.”