Listening to the plants in Joan Sanders’ gardens 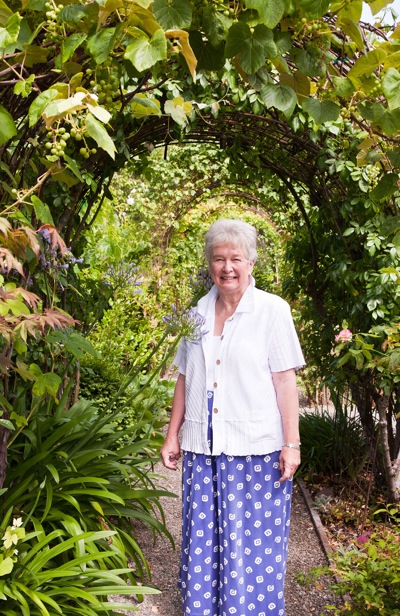 Joan Sanders believes gardens should talk to each other. The front and backyard of her Atherton home feature multiple gardens. As you move from one to another, if you listen hard, you can almost hear the chatter. The surroundings are that magical.

While Joan thinks she’s always been a gardener, she admits that while raising five children, she didn’t have the leisure to think much about it. Moving to her current home in 1970, the first garden plan was created in 1976, the beginning of what would eventually transform what was essentially a blank canvas. “My first husband and I did most of the work on it ourselves,” she recalls. “We were young and energetic.”

One of their first structures, a pergola, still stands. On a recent visit it was getting a facelift of sorts; the wooden benches beneath it were being replaced by concrete ones that mirror other areas of her gardens. 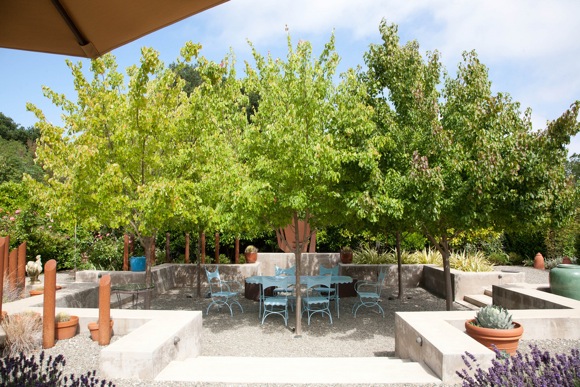 One of the newest additions is a sunken garden (pictured above) that houses a 1940s French dining table and chairs. “Initially it was going to be a walled Zen meditation garden,” she says. “To get a feel for what it would be like, I put up temporary barriers. I didn’t like it and my landscape architect Peggy Hinman suggested we sink it — the idea and the garden!”

Joan thinks the best thing about gardens is that you have places to go to, areas that you want to be in. Ironically, except for when she entertains and cocktail time with her husband under the Redwoods, Joan doesn’t do much sitting in her various gardens. “My garden is to work in,” she says. “Some people play tennis, I play garden.”

Artwork is on display in almost every garden area, including sculptures by Greg 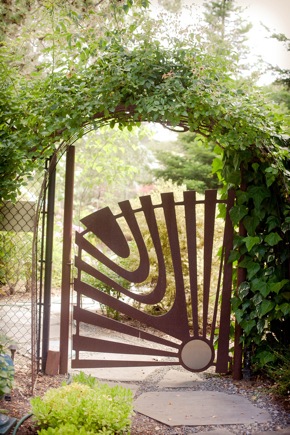 Hawthorne, whose studio is across from Nepenthe in Big Sur. “I had him do my gate (pictured right) into the bocce ball garden,” she says. “I didn’t think the fence was important but the gate was.”

Roses are Joan’s siren song, and indeed there is a rose garden in the backyard. “At one time I had over 200 varieties, but I think we’re down to just over 150,” she says. “I gave my husband a pruning class out at Filoli, and he does the pruning now.”

Joan says she can spend as much as eight hours a day in the garden working and then maybe not return for a week. “My daughter Susannah disagrees. She says I can’t go 10 minutes without getting my hands in the dirt,” she says.

Next on tap for renovation is the vegetable garden, which she enjoys, in particular, with her 11 grandchildren. She calls it “Peggy’s last stand,” due to the landscape architect’s promise to soon retire. “We’re going for the Versailles of vegetable gardens,” she says. “Over the years, I’ve given her ideas to put in her oven.  She lets them grow. It’s been a great partnership.”

A great tribute to a lovely lady and her beautiful garden.