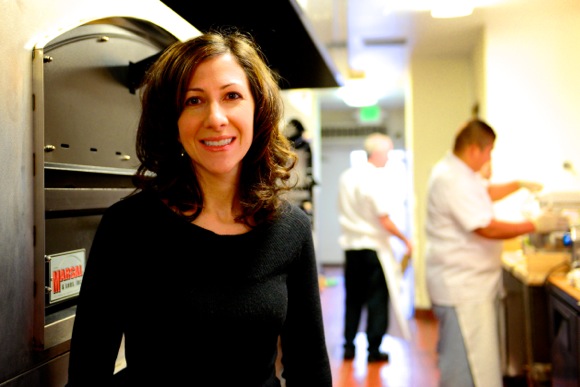 Menlo Park resident Rachel Candelaria is a familiar face to many locals, thanks to her time spent at Left Bank in the early 2000s. Her name may also strike a chord with InMenlo readers, due to her passion for desserts and photography, which resulted in a series of recipe posts last year.

Now, she’s turned her attention to the successful operation of recently-opened Campo Pizzeria in Palo Alto, where she’s the General Manager, following stints as assistant GM at Osteria Coppa in San Mateo and head of the wine program at Sam’s Chowder House on the coast, both of which are owned by Paul and Julie Shenkman, as is the new Pizzeria.

“The concept for the Palo Alto restaurant was based on the fact that there really isn’t any other nearby restaurant serving rustic Italian food,” she said. “We’re using as inspiration the Abruzzo region of Italy and making use of the great contacts we have with local providers that have been serving the other two restaurants.”

Rachel and the ownership group, which also includes Lewis Rossman, hope that Campo becomes not just a restaurant but a social gathering place. “There are a lot of communal tables, because part of the joy of eating is the social aspect,” she said. “Sharing the meal is as important as the food and wine.”

To complement the rustic Italian cooking of Executive Chef Sean O’Brien is a fresh mozzarella bar with all cheese made in house and stretched to order. Plus there are the wine pairings, which feature mainly Italian wine with a sprinkling of local wineries — Alfaro Family Vineyards, Balliwick, Domenico, Fogarty, Skylark, Testorossa, and Varner. “I’m proud of our wine list,” said Rachel. “Of the 90 or so bottles, 30 are under $40.”

The pasta served is also made in-house as well as, eventually, the salumi. “We’re really trying to be conscious of housemade, local and sustainable,” said Rachel.