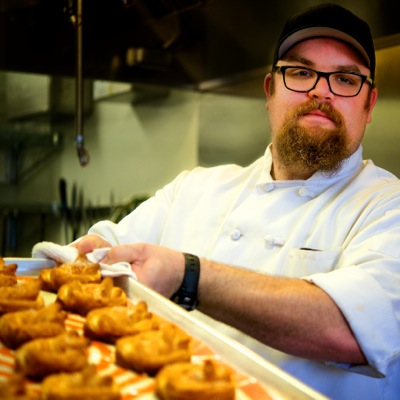 Some times the road to becoming a professional musician — and a tuba player at that — takes a strange turn, and you end up being a chef without going to culinary school, thanks to being trained by some of the Peninsula’s most noted culinary talents. That’s Matt Hunter’s story, and he’s sticking to it.

“Cooking was always part of my life, even when I didn’t think it would be my career,” said Matt, who is turning out inventive pub fare at the newly-opened Freewheel Brewing Company at Marsh Manor. “Growing up in Palo Alto, my mom and I used to watch PBS cooking shows on Saturday mornings. My first kitchen job was as a dishwasher at Stanford, and I was an apprentice chef at Zibbibo when I was in high school.”

After going to music school and coming to the realization that orchestral tuba positions were not easy to find, Matt got a job working for chef Charlie Ayers at Calafia, where he was eventually named sous chef at the adjoining market.

Matt says Ayers taught him a lot, as did John Bentley. He was a line cook at the chef-owned restaurant of the same name. “John is incredible and he really enjoys teaching,” said Matt. “I worked with him for almost four years, and he’s been a big influence on me, including preparing dishes with big flavors.”

At Freewheel, where everything is made in-house, Matt said his initial menu was conceived to complement and highlight the variety of ales brewed onsite. And while the snacks read “conventional pub fare” — fries, potato chips, pretzels and beer nuts — the reality is they are hardly that, more extremely tasty small bites.

The menu features a couple of hand pies and a IPA braised bratwurst board, but will also include daily specials like curries, fried chicken, beef “Beerguignon”, fresh Dungeness crab on toast (a winner on a recent visit), and mac & cheese. There are also vegetarian offerings, such as spicy cucumber, made so using a combination of cayenne, lime, jicama, coriander and pomegranate. Prices are reasonable — given the quality a steal.

“This place [Freewheel] is really different for the area,” Matt said. “We’re hoping that we can really show people what good beer and good food tastes like together.”