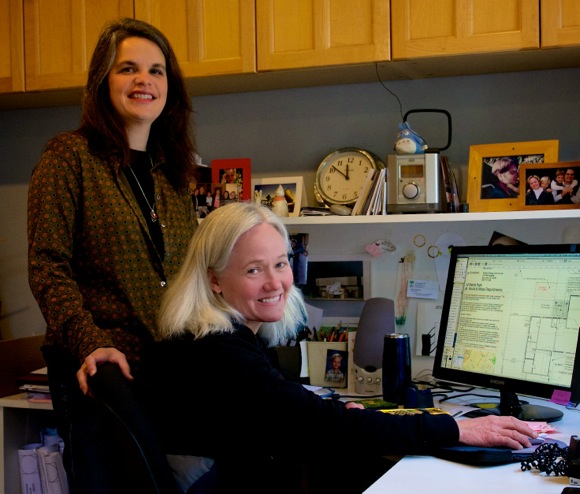 For the past 12 years, Menlo Park-based architects Kelly Johnson and Karen Zak have been in business together, but they’ve known each other since their undergraduate days at the University of Michigan. Yet, they arrived at their profession from different paths.

“I knew I wanted a career that involved math and science and initially pursued aerospace engineering,” said Karen (pictured seated). “But I found it wasn’t for me. I attended a career program at Harvard and discovered that architecture fulfilled my interests in design, planning and organizing.”

Kelly had taken a lot of art classes in high school but also excelled in math and science. She even attended a summer camp that specialized in engineering. “Architecture married the art and engineering,” she said. “Art alone wasn’t quite enough for me. I like to think about the quarter inch — I like detail.”

The vast majority of their work is residential. When taking on a new project, they ask very specific questions and learn as much as possible about how their clients live and entertain. In their minds, there is no such thing as too much information.

Both really enjoy working with clients. “What keeps me interested are the people we meet,” said Karen. Added Kelly: “Sometimes I take on a small project just because I like the people so much.”

Their biggest obstacles are the various municipal codes they must sort through on every project, whether it’s a new residence or a remodel. But they want to give a particular shout out to the people who work in the city of Menlo Park’s building department. “They are so helpful and go out of their way to guide us,” said Kelly.

We asked them individually what would be their “blue sky” project. For Kelly, it would be a new modern house. For Karen, there was no one thing.

“What excites me is coming into a space and seeing that the light is coming in just the right way after a project is completed,” said Karen. “So I guess you could say my next project is my favorite thing!”