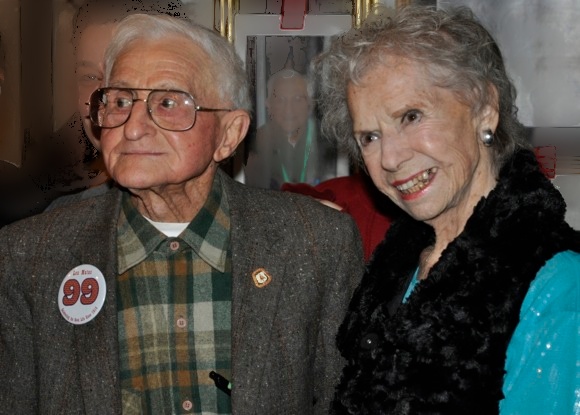 Not many men are around to celebrate their 99th birthday. Fewer have a girl friend to celebrate with. Longtime Atherton resident Louis Matas was indeed fully present last night at a birthday celebration organized by fellow members of the Los Trancos Woods Community Marching Band (bottom), attended by friend Vi Janis (pictured above with Lou), family, and friends at Harry’s Hofbrau in Redwood City.

When he was 93, the town of Atherton proclaimed him “Mayor of Maple Avenue.” That was noted by Atherton Mayor Elizabeth Lewis in new proclamation, which she read to the assembled guests. It noted Lou’s lifelong interest in motorcycles and Model A cars and his ownership of a 1929 Model A. She also said that he has the distinction of being the longest active member of the San Mateo County Carpenter’s Union #217, which participated in the building of many Atherton and other Peninsula homes.

As for Vi, they met singing in the Golden Tones Chorus, which performs every Friday at the San Mateo Senior Center. No one has mentioned to Lou that he’s older by a decade or so than most of the people he’s serenading. Or, for that matter, that aging is for sissies. 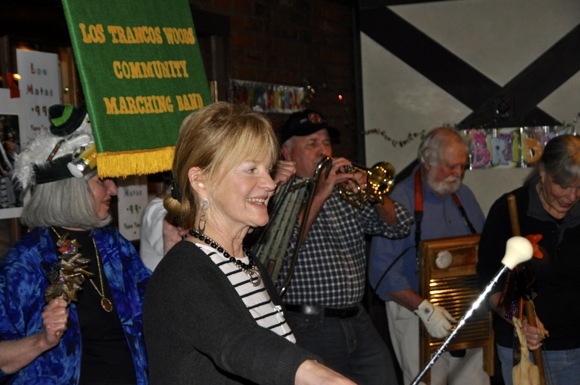 Doug I’m sure you have bought as much joy to his life as he has yours…… are truly a great friend I know!!! jacl