Come for the music, stay for the fun: The Los Trancos Woods Community Marching Band 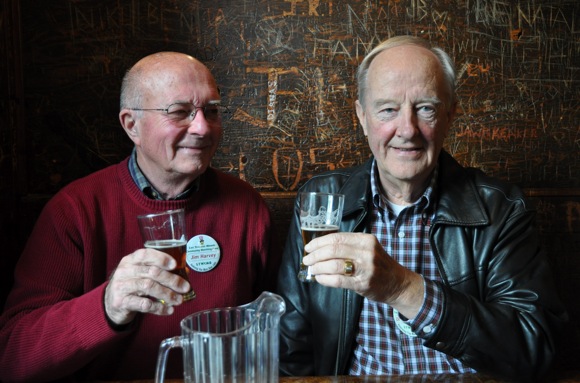 Suppose you were a Stanford student living way off campus out in the woods. It was the late 1950s and entertainment was homemade. A little beer, a little music, a lot of fun. On a bright and sunny morning in 1960, after a full night of partying, it seemed like a good idea to get some fresh air. It was, after all, January 1st.

“So we went out and marched around Los Trancos Circle, picking up children and stray dogs along the way,” recalled Jim Harvey (pictured left), the sole surviving member of the original — and still active — Los Trancos Woods Community Marching Band (LTWCMB), which made its debut that New Years Day.

The group must be the most unstructured musical group in the country, if not the world. There are no rehearsals, no sheet music, no uniforms, and no marching. You don’t even have to know how to play an instrument — kazoos are welcome.

“Well, we do have to have enough real musicians who can actually play an instrument — and a few or our members are professionals who perform locally,” said Jim, now a resident of Menlo Park. “But membership is open to anyone who wants to join for $5.”

Jim and Atherton resident and fellow band member Doug Anderson sat down to talk to InMenlo about the past and present LTWCMB. Living up to the band’s tradition — it’s always followed along a parade route by a keg — the discussion took place at another Peninsula icon, the Oasis, over a pitcher of beer.

While the band is like none other, Doug says there are imitators: “We’re sure the Stanford Band copied us.”

Doug  plays the snare drum and was in bands in high school, college, and the Air Force. “I missed it, so I joined Los Trancos. It’s much more fun to participate than to watch.” 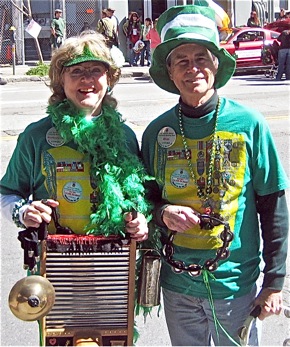 The LTWCMB remains a favorite attraction at the six or so parades they participate in yearly, including San Francisco’s St. Patrick’s Day Parade (two photos are from 2010), Redwood City’s 4th of July Parade, and the Los Altos Pet Parade. They also make a couple of non-parade appearances and occasionally do private performances. “One woman hired us to play patriotic music at a gathering in remembrance of her husband because he would always go to the Broadway Cocktail Lounge after the 4th of July parade to listen to those tunes,” said Jim. (A list of 2011 gigs is on their website.)

Jim, who plays the trombone, said the band, which now has about 185 members of which 100 or so perform together, has remained unspoiled by commercial interests for all of its 51 years. Fun and friendship is what drives them. “About 30 years ago one of the local TV news stations did a story about us,” recalled Jim. “We don’t think it was coincidental that they aired it on April 1.”

You might catch a glimpse of the LTWCMB in Los Altos on Saturday, April 16, where they’ll be holding their one “rehearsal” a year from 1:00 to 4:00 pm. “We try to learn a couple of new tunes but don’t always succeed,” said Jim.

“But we do get out and march around the neighborhood a bit,” added Doug.

I use to take my kids to watch this band until one day I decided to join. It brings me great joy to be around these folks. I have no musical talents but have picked up the kazoo as my instrument. LTWCMB is the best!

We have been in the LTWCMB for over 25 years and have so many great memories of all the different venues. There is a closet in our house full of “costumes” and every event is an adventure! What a wonderful time we all have together. People actually LOVE US!

It is great to see people be active it is so wonderful because you willl live longer. An active lifestyle is a perspective a frame of mind because age is a number. I teach a swim class one of my gals is 97 years young. 45 minutes in the pool followed by twenty touches. Wine is also a great gift after living in Napa and sonoma one becomes spolied with great food and wine.

A glass of red with dinner is great for your heart and blood! Stay active and happy all the best