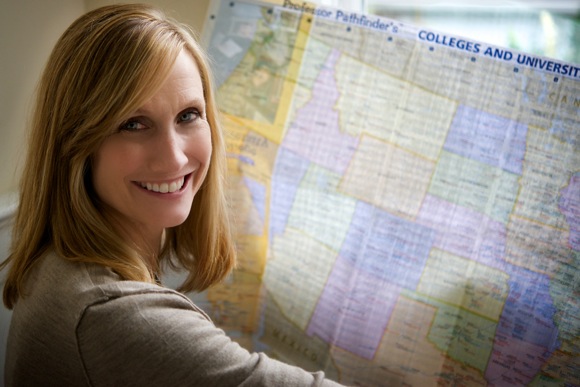 Menlo Park resident Amy Reardon gravitated to her current career as a college counselor naturally, even though she spent her early career years in finance and civic development. “I used to help kids when I was a babysitter,” she says. “And then it was my nieces and nephews. So, I feel like I’ve been guiding kids through the college decision making process all my life.”

Inspired to action by a column written by a counselor she read in a newspaper, she took a post-graduate certificate program in college counseling offered by UCLA and began offering her services. Given that it’s the time of year kids start hearing where they got in, not when they consider where they should apply, we focused on that part of the process during a recent visit.

InMenlo: What should an applicant do when they have a plethora of choices, when they’ve gotten into almost every school they applied to?

Amy: My opinion is that they should go with their gut. I expect that they would have already visited the campus, but they may want to revisit their selection and really look at the kids and imagine them being part of the scene both academically and socially.

A lot of kids seem to think they should automatically go to the most selective school. But, it’s really important that they feel really comfortable about the academic and extra curricular offerings, not just the fact that the school is noted for being highly selective. Going to a selective school and then returning home because you’re not happy is not a good experience.

InMenlo: What about the opposite scenario, when kids are accepted at just a few schools, none of which they are excited about?

Amy: I think they should choose one and give it a try because it may surprise you. I went to the University of Arizona, and it was not where I wanted to go. My parents said I had three options — all of which were big state schools. I ended up getting some great things out of my college experience that I didn’t anticipate. So to kids who aren’t thrilled, I say, “Give it a full year, not a semester. In the spring, if you’re really unhappy, you can transfer somewhere else in the fall.”

InMenlo: Do you talk about community college or gap year options much with your clients, be they kids or their parents?

About a gap year, sometimes it’s planned, as in the case of a kid who just doesn’t feel ready or just wants to take a year off. Then, there are those that fall into a gap year because they don’t like their acceptance choices.

Amy: Parents appropriately have an opinion if they’re paying for college and, in that case, may even have the final say. But in the end, it’s to everyone’s benefit for the student to be excited about their decision and ultimately have a lot of input.

InMenlo: Is there any part of the college selection process you wish was different?

Amy: I’d like to see change on the college side. Every college seems to have the same story: “We want to admit kids who take advantage of AP classes and who have lots extra curricular. I’d love to see schools limit the number of APs. I believe every student has something to offer a college environment. They are all different and not all suited to AP classes and lots of activities.