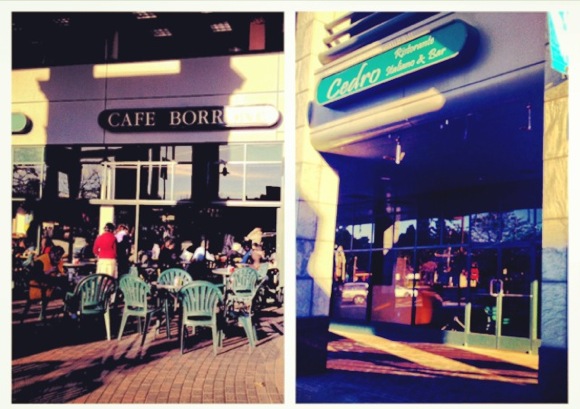 Cafe Borrone, a cafe located in downtown Menlo Park, is expanding to occupy the neighboring space the Italian restaurant Cedro once held. Cedro’s recent closing, coupled with the BBC’s  closure, leaves Cafe Borrone the only restaurant in the Menlo Center.

Cafe Boronne started out in Redwood City, came to Menlo Park in 1989, and has been successful ever since. Its food and beverages, combined with the cafe’s laid-back atmosphere, has proven to be an ideal environment for studying, socializing, working among members of the Menlo Park community.

Cedro Ristorante Italiano, a restaurant and bar that opened in 2009, was owned and run by the Nevigato family. Cedro was located in the lease space adjacent to that of Cafe Borrone in Menlo Center. After Cedro closed last January, Borrone bought Cedro’s former lease.

“The building management approached us about it. [The management] said they respected us as a long time resident of this location and wanted to offer us an opportunity to move in,” said Jeffrey Pebbles, the general manager of Cafe Borrone.

“The two locations – the original Cafe Borrone, and what was once Cedro – will not be interconnected, but rather serve as two separate locations “that will each offer something special,” according to Pebbles.

“The new location will be offering a different setting than the cafe,” Pebbles said. “The space is very small, so we don’t quite have an idea of what we will be able to fit in.” He added that his staff will be “taking a great deal of time planning for the new location, because we want to be sure [it] offers something new and unique.”

With Cafe Borrone’s expansion, the restaurant staff has many new ideas that they would like to bring to the new location. However, Pebbles stated that the definitive layout and offerings “are still yet to come.”

“With our dinner specials that we’ve been offering, our chefs have become excellent at making house made pasta, which is one thing we’ve been entertaining,” Pebbles said. “There could be more options of house made pasta, for people to take home or enjoy [at the new location], or maybe both.”

Another possibility for Cafe Borrone’s new location could be acquiring a liquor license. However, if the cafe were to serve alcoholic beverages at the new setting, “you would not be able to take [alcoholic] beverages back and forth [between locations], as the original cafe would not acquire a license,” Pebbles stated.

When asked if they would be hiring new employees for the newly acquired location, Pebbles smiled. “We’re always hiring at Cafe Borrone. We’re always looking for enthusiastic, hardworking people looking for a job and determined to learn.”

Pebbles also said that to staff the new location, the cafe will most likely “take employees from [the original location] and move them over.” This way, “customers checking out our new place would be able to see familiar faces, who would be able to explain what the new place is all about.”

Because this project is fairly new, there are many ideas that are still developing. However, regardless of the outcome of the cafe’s new location, there is no doubt that Cafe Borrone will continue to be a favorite location of M-A students and the Menlo Park community.