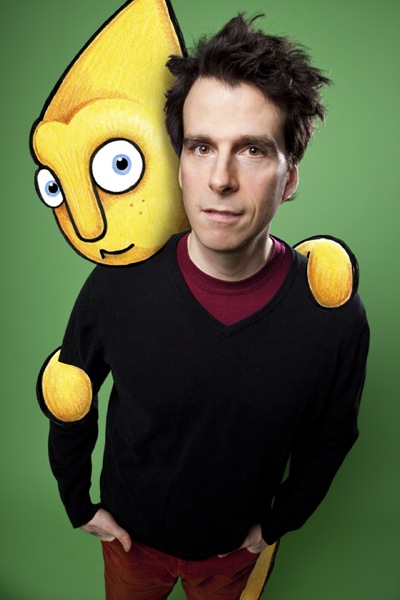 Morgan Taylor, who’d played in rock and roll bands since he was a teenager and subsequently worked as a sound engineer, found himself wanting to do something different early into the 21st century. So, the long time doodler and self-taught illustrator started drawing pictures based on songs he’d written.

“These were songs that were more whimsical than rock ‘n roll, and I realized they were written in the first person,” he said during a recent telephone interview. “One of the songs was I’m From the Sun, which seemed to fit perfectly with this pointy-headed yellow guy I’d drawn. All the pieces of who was to become Gustafer Yellowgold came together as a happy accident.”

And with that (well, not quite so simply!), Morgan turned from rock to performing the Gustafer Yellowgold Show, described as a multi-media performance of live music, animated illustrations and storytelling or, as Morgan explains the experience, “a musical moving book.” The show, recommended for ages 3-10 but appreciated by the adults who bring them, is coming to the Atherton Library (2 Dinkelspiel Station Lane) on Wednesday, March 13 at 4:30 in a program called Rock Melon, which is free of charge.

When Morgan first conceived Gustafer, he had a backlog of songs that made up the first DVD he issued. “If someone had made me sit down and write ‘family music,’ I probably couldn’t have done it,” he said. “As I look back, it was the unselfconsciousness of what I was doing that gave it soul.”

Morgan spends about half the year on the road doing shows and the rest of time, “I’m toiling away in my studio working on the next DVD,” he said. “Each one takes about a year and a half. All the illustrations are hand drawn.”

Doing family shows is a world apart from being on the rock ‘n roll circuit, but as a father of two himself, Morgan sees pluses. “The down side is that I’m on the road and away from my kids,” he said. “But, the upside is that I play shows at 11:00 am, not 11:00 pm. I drive from show to show in the daylight.

“The music is catchy alternative pop, not rock, but if you aren’t paying attention to the lyrics, it sounds like grown up music. The biggest compliment I get is that parents appreciate the music and find themselves leaving the CD on in the car even after they’ve dropped their kids off for school.”