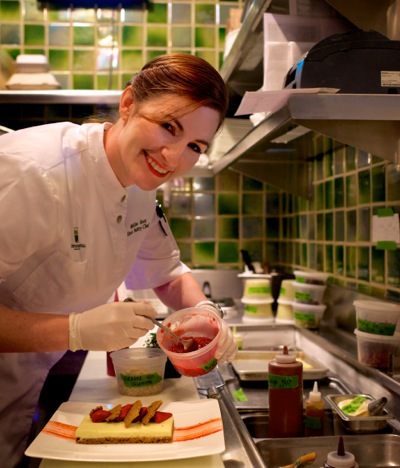 Mellisa Root, who grew up in Idaho, joined the staff at Rosewood Sand Hill in Menlo Park as Executive Pastry Chef last fall. She oversees baked goods and confectionaries for the hotel’s restaurant Madera as well as banquet services. Before coming to California, she was most recently at Thomas Keller’s Per Se in New York City and Francois Payard’s at Caesars Palace in Las Vegas. She’s a graduate of the California Culinary Academy (CCA). We visited with her in the Madera dining room between meal services, talking about life as a chef and preparations for a series of special mother-daughter tea/spa days the hotel is holding throughout the month of May in honor of Mother’s Day.

InMenlo: What prompted you to become a pastry chef?

Mellisa: Growing up as a child, Tuesday was always my night to cook. I had two sisters and took my day of week very seriously. I’d check out books from the library and built a appreciation of cooking.

But, I was going to pursue a musical career, and when I figured out that wasn’t going to happen, I thought I wanted to study forensic science and join the FBI!

At a turning point, my Mom encouraged me to go to culinary school. I’d always been a kid who pleased her parents, so I went to CCA because it had the best baking and pastry program.

Mellisa: I think it was the cake I baked for Elton John in Las Vegas. It was a mini replica of his red piano, including a marbling technique that showed off the wood grain. There was a man with very big glasses sitting at the keyboard. The cake was huge — and he was very pleased.

InMenlo: What was the most memorable dessert you’ve ever eaten?

Mellisa: Probably the dessert I had at Alain Ducasse at the Plaza Athénée in Paris. It was on my honeymoon so I was already in a good mood. It featured a passion fruit custard on the bottom and then a layer of vanilla creme custard topped with little wisps of sea foam and cracked black pepper. I remember thinking, ‘I can’t believe there’s pepper on my dessert.’ It was simple but delicious. 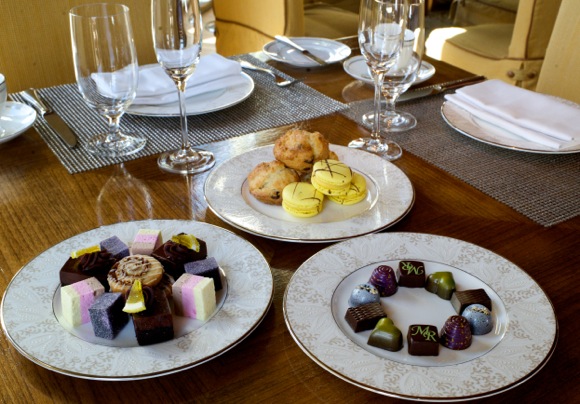 InMenlo: What’s planned for the series of mother-daughter teas?

Mellisa: Strawberry cheesecake is on the menu for the month of May. And for Mother’s Day and the teas, I am focusing on lighter desserts that women tend to order. [Photo above is planned tea selections. Reservations must be made three days in advance for tea/spa package by calling (650) 561-1580.]

InMenlo: How do you handle work/life balance?

Mellisa: Almost on a daily basis, I’m the first chef in the building. I roll in around 7:30 am and leave around 10:30 pm. Luckily, my husband is a chef as well and understands the commitment and passion for food.

I find being a pastry chef is extremely rewarding. We’re wired differently than savory chefs, more analytical, more ‘devil is in the details.’

Working here, I’m in an environment where there are so many aspects of the pastry world — and that’s great!