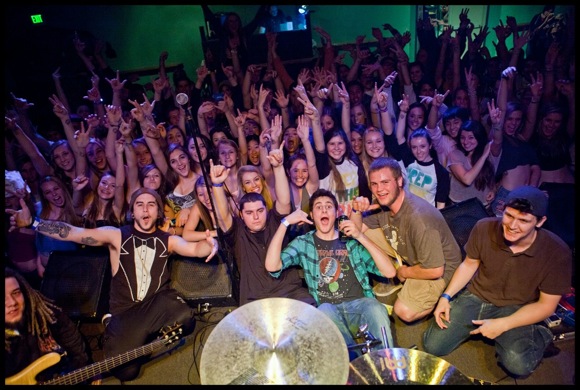 Dewey and the Peoples, a rock reggae band from San Carlos, will be appearing at Freewheel Brewing Company in Marsh Manor on Friday, May 31 from 8:00 to 11:00 pm. There is no cover fee.

The band, shown with fans, has appeared at Cali Roots Fall Mix-up in Monterey, the DNA Lounge and Brick and Mortar in San Francisco, as well as many local venues. Singer and front man Darren Robinson, aka “Dewey,” began collaborating with guitarist Jared Solomon in 2011. Jared brought in two musicians he had met in band class at Sequoia High School, bass player Marley Edwards and drummer Peter Johnston, and then Donnie Dal Broi was brought in on keyboard.

The college-age musicians are serious about their music: Peter attends UCSC, studying percussion, Marley and Darren study music at The College of San Mateo, and Jared will be attending the prestigious Berklee College of Music in Boston beginning this fall. The band has an EP, Righteous Lee, available on iTunes and is preparing to head back in to the studio to record a complete album.

“This is the first of what we hope are many regular gigs at Freewheel, said Menlo Park resident Gary Waymire, one-quarter of the brewery’s team. “We’re focusing on local bands who want to play in an intimate venue or who are developing groups that maybe can’t fill a place as large as The Club Fox, for instance. The type of music will vary, but most will be singer-song writers or acoustic performances of classic rock, reggae and bluegrass music.”