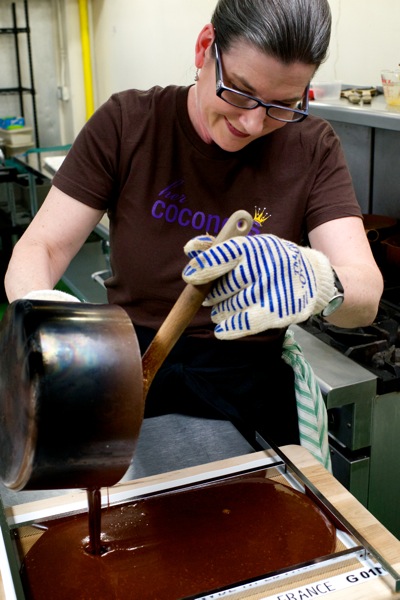 By the time we arrived at Shelley Seward’s candy kitchen around noon, the owner of Her Coconess Confections, had hand dipped 450 chocolates. “It’s labor intensive,” she said wryly.

Shelley, who has lived in Menlo Park her entire life except for a three-year period, worked professionally in luxury goods, first at Channel and Tiffany, before starting a cookie company. “When that venture didn’t succeed,” she said, “I worked in high-end appliances and started making candy as a hobby. I’m a self-taught confectioner.

“My good friend Pamela Keith, a caterer who runs culinary events for SubZero, had a party and I brought my confections. The next day both friends and clients called her asking where to get ‘that candy.'” 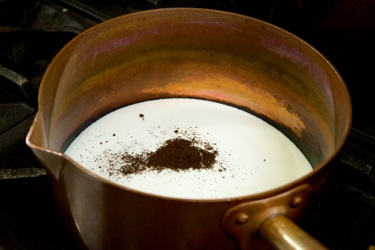 Her hobby became a business in 2008 and Shelley is a familiar face seasonally as the Menlo Park Farmers’ Market (November/December, two weeks before Valentines Day and two weeks before Easter). She’s now at the Palo Alto Farmer’s Market behind the post office near Hamilton. Her confections can also be ordered online.

Recently, her Vanilla Bean Salted Caramels received the 2013 Good Food Award given in recognition of both craftsmanship and commitment to responsible production. They were selected among 1,350 entries from across nine industries and 30 states. In addition to her salted caramels, Shelley also makes Espresso- and Chipolte-Infused Caramels as well as Bittersweet Nibby Rocky Road.

“I dip about 2,500 caramels and nine slabs of rocky road a week,” she said. “The caramels have about a three-month shelf life and the rocky road about six. All of the candy is produced to very specific measurements. There are cooks who add ‘a little of this and a little of that’ and then there are pastry chefs who live by precision!” 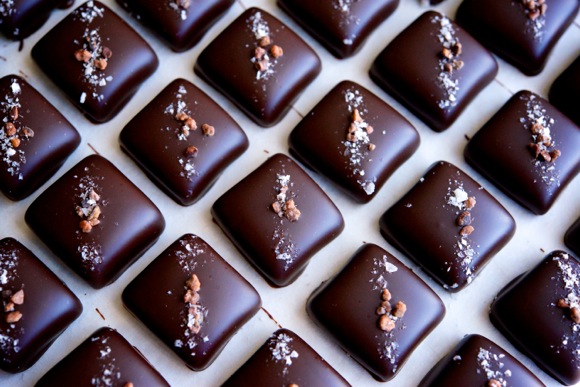 I just tried the chipotle caramel at the Palo Alto Farmers market. It has the perfect kick at the end.