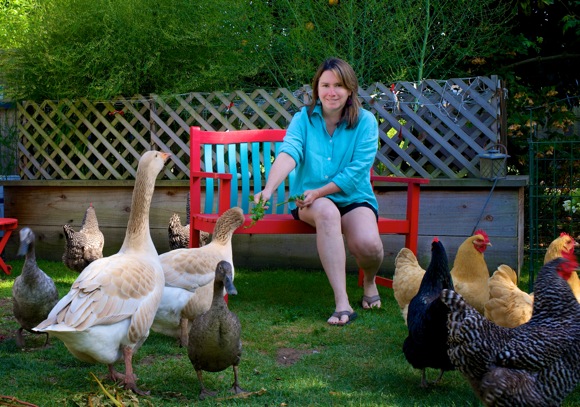 Gwyn Murray can’t remember a time when she didn’t have animals, and not just the usual cats and dogs. “I lived in Singapore for a time when I was a child and we had Agile gibbons,” she says. “They’re quite beautiful and intelligent. “One of our females was placed at the Twycross Zoo in England. She became one of the best breeders and I visited her over the years. She died at age 46.”

Given that background, it shouldn’t be surprising that the Menlo Park resident shares her home with quite a menagerie, one that’s expanded over the past decade.

“I have a full house — and it’s not a very big house,” she says before proceeding to run down her current list of inhabitants, which also include two teens who are students at M-A: three black cats, one German Shepherd Dog, one Black Labrador, a Bearded Dragon Lizard, a Box Turtle, two Lion-headed rabbits, 9 chickens of three different breeds (Buff Orpington, Australiorp, Barred Rock), two Indian Runner ducks and a mating pair of American Buff Geese. Oh, and a few bee hives, which help pollinate her garden of mostly edible plants.

Gwyn, who practices law from her home office, looks at her animals and garden as “my reward.” “I tell myself, ‘if I finish this project, I can go hang out with the chickens.’ I’m not good at sitting for long periods of time, so being surrounded by pretty things like my roses and all the animals is perfect.”

Her neighbors benefit, too. She shares eggs and honey and they bring her snails to feed to her chickens. “And the little kids think of my backyard as their petting zoo,” she say. “That fits perfectly with my bucket list item to teach children about where food comes from and the importance of treating animals well. I guess we all win!”

Looks like a happy home for all! What a wondeful photo.

Hi Gwyn – Yvonne C. sent me the article. You look great and as young as ever. I see that the little “zoo” has grown over the years. And you still manage to practice law. Can’t believe your kids are in high school! All the best, B.