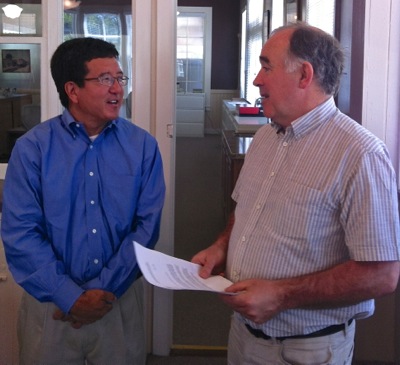 The creation of an informal friendship relationship between Menlo Park and Galway City (which has absorbed the village of Menlough, Menlo Park’s namesake) took another step forward on June 5th when a letter to Cllr. Terry O’Flaherty, Mayor of Galway, was sent by Menlo Park Mayor Peter Ohtaki proposing a dialog between the two cities on establishing a partnership patterned on the Sister Cities International program.

By chance, Gerry Hanley, a retired engineer from Galway City and former resident of Menlough, was in Marin County performing with an Irish band (his avocation) and agreed to visit Menlo Park again. (Some details of his earlier visit can be found in a March 29, 2013, InMenlo posting.)

The meeting between Gerry and local residents on June 18th in the Chamber of Commerce Conference Room (in Menlo Park’s historic railroad station) was the perfect occasion for Mayor Ohtaki to present Gerry with a copy of his letter to Cllr. O’Flaherty (photo right). The group confirmed Jym Clendenin (MPHA), Fran Dehn (President, Chamber of Commerce) and Jim Lewis (MPHA) as co-chairs of the Menlo Park organization now named Two Menlos. Following the meeting, Gerry was treated to a lunch at the nearby Trellis Restaurant.

Two Menlos is presently more a concept than a solid organization. It is being sponsored by the Menlo Park Historical Association (MPHA). Sponsorship by additional organizations is highly desirable. Going forward, it’s crucial to find local residents interested in facilitating academic, cultural and commercial connections with Galway City. (There is a similar effort underway in Galway.) If you are interested, or just want to be in the communication loop (an email list), you can find more information at the Two Menlos web site. Please send questions or suggestions for Two Menlos to menlosisters@gmail.com .

…. and since then the two cities have signed a Friendship Agreement and last
weekend you wonderful Mayor Ohtaki visited Ireland and unveiled a plaque
to commemorate the common heritage, at the pier in Menlo, Galway City.

A civic reception was held at City Hall, Galway to honour your Mayor and to record his visit.