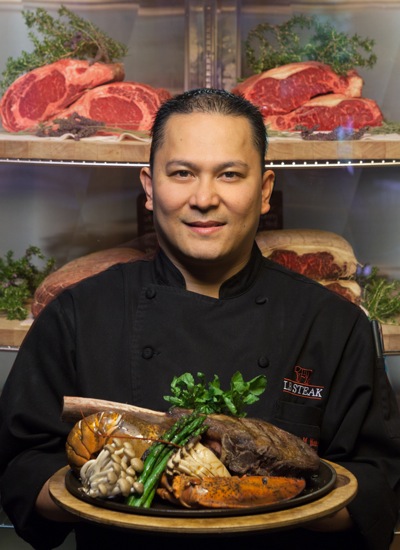 Brendy Monsada has been Chef de Cuisine at LB Steak in Menlo Park since last September, following a three- and-a-half-year stint at Left Bank Brasserie just down the street on Santa Cruz Avenue. We talked with him about his journey to becoming a chef and how his Filipino heritage has influenced his craft.

InMenlo: Why did you decide to become a chef?

Chef Brendy: I immigrated from the Phillipines when I was 13 and grew up in the Sunset District of San Francisco. In my native country, my dad had done some farming and managed a sugar cane plantation. I got used to planting vegetables and taking care of animals.

When I got here, I wanted to work part time. An uncle was working at Lefty O’Douls near Union Square. I  got a job there bar backing and cleaning. By the time I was at Lincoln High School, I’d moved to food prep and bus boy.

My uncle was a good mentor, urging me to get some experience and improve. Eventually a position opened and I got into cooking. People would tell me my how good my cooking was, but I still thought I wanted to join the Marines. An eyesight issue prevented that and I went to the Hotel & Restaurant Management Program at the City College of San Francisco.

InMenlo: When you’re not thinking about food, what do you like doing?

Chef Brendy: I enjoy jogging and being outdoors. But I do think about food a lot. I like reading about other chefs and reading their cookbooks, like Alinea, by the Chicago chef Grant Achatz.

InMenlo: You oversee a kitchen in a steak house and are about to present a meal based on your Filipino heritage [details below]. If we stumbled into your home kitchen on a night off, what might we find you cooking?

Chef Brendy: I really like making pasta. I have a three-year-old, and he wants to hang out in the kitchen and bang on the mixing bowl. He loves playing with whisks and ladles and pretending he’s tasting something. We do fresh pizza dough together and get flour all over us.

Footnote: LB Steak in Menlo Park will host a Filipino Heritage Night dinner on Thursday, July 25. The $45.00 prix fixe meal will be served family style with all dishes except dessert brought to the table at once. The price excludes tax, gratuity and alcoholic beverages. Reservations can be made by calling (650) 321-8980.