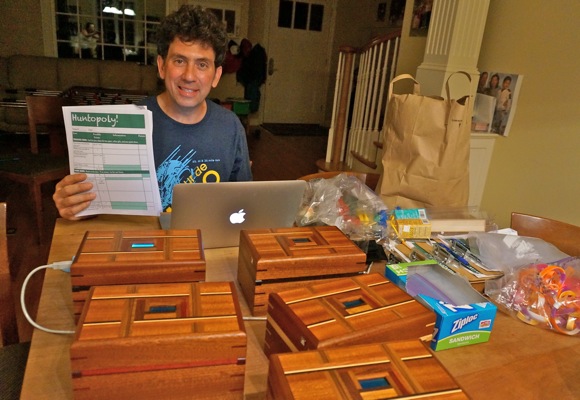 Some advocates of children’s outdoor play would have you believe that technology is the enemy. Kids who attended my fifth annual Camp Yale two weeks ago would vehemently disagree.

They played Huntopoly 3.0 (here are articles on Huntopoly 2.0 and 1.0), which featured treasure boxes with some nifty electronics.

Each team of kids got a “Quest Box,” that has a small LCD screen and button on the outside, and treasures and hunt instructions on the inside. Also on the inside, hidden, are the electronics, including a GPS chip. 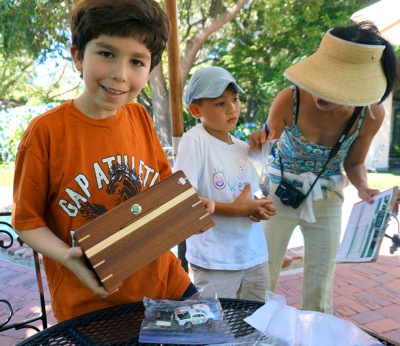 The teams’ first task was to find the one place on earth where their boxes can open. Using an application on my computer and a USB cable, I set a unique location on each box the night before. Every location I chose was within a half mile of my yard, which was “home base” for our camp.

To find that location, kids simply made an “attempt” to open the box by pressing the button on it. The LCD screen told them how far they were from the location, but it did not tell them in which direction it was. So, they needed to think: “Which direction should I go before making my next attempt?” If, on their next attempt, the screen showed a shorter distance, they would be encouraged to go further in that direction. However, this might not take them closer to their destination because their movement was constrained by rectangular city blocks.

When they finally made an attempt within a 10 yard radius circle of their destination, the box opened, and they found treasures (e.g. hotwheels, toy boats, bouncy balls, etc.) inside, along with a sheet of paper giving them further hunt instructions.

That sheet asked them to collect information, items and photos at that location, and it then gave them an address of a house or storekeeper to call on, where they had to knock on the door and collect more information, items, and photos. If they got no answer there, they could simply go next door and try there.

They got points for all these items they collected, and they could also get points by depicting what they collected with a sharpie pen at that location on my driveway map.

I awarded prizes to the winning team members each of the three days we played Huntopoly – gift cards from a local toy store.

To say the least, campers were very engaged and passionate about Huntopoly 3.0 and the Quest Box in particular. They also learned a lot, both generally about geometry and math, and specifically about the geography of our neighborhood. 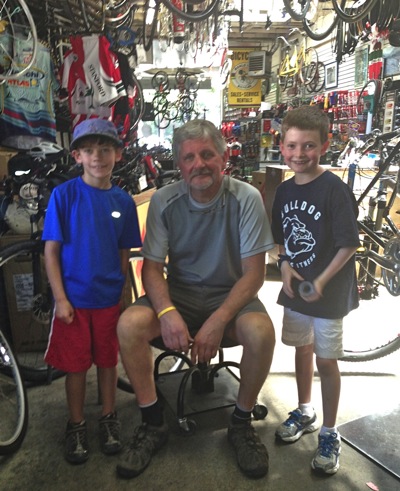 Finally, the game helped them to establish some relationships with people in the neighborhood that I hope will last. On the first two days, kids visited a resident after they opened the Quest Box, and on the last day, they visited a local shopkeeper [Rainer Zaechelein, owner of Menlo Velo – pictured right].

I know all of the shopkeepers they visited, and I talked with them the day before to prepare them for the teams’ invasions into their shops. I understand that those visits were particularly enjoyable for all involved.

To say the least, campers were very engaged and passionate about Huntopoly 3.0 and the Quest Box in particular. They also learned a lot, both generally about geometry and math, and specifically about the geography of our neighborhood.

Yes, they did spend some time pressing a button and looking at an LCD screen, but those short moments propelled them into the real world walking considerable distances, thinking geometrically, and peering intently, all while collaborating via conversation.In other words, the Quest Box, an electronic gizmo, was a catalyst in creating a highly active, stimulating, social real world experience for kids.
Menlo Park resident Mike Lanza is the author of Playborhood
Category: