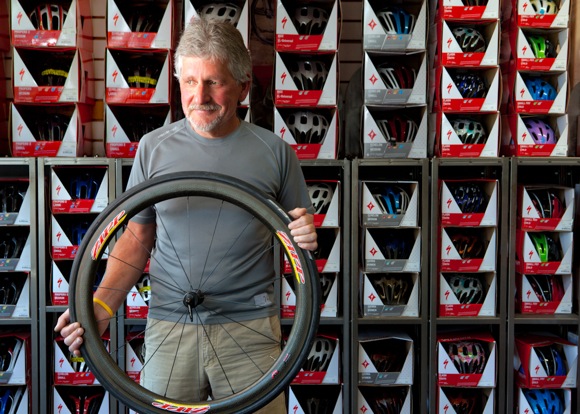 Rainer Zaechelein, owner of Menlo Velo on El Camino in Menlo Park, operates a real bike shop, meaning there’s gear for serious cycling enthusiasts. But stop by to have training wheels put on a garage sale bike for your granddaughter, and you’ll get the same kind of service.

Good customer service is what’s kept Menlo Velo going while other bike shops in Menlo have come and gone. “We try to give people a little more than they expect,” said Rainer. “Plus there’s consistency. Customers see the same people working here every time they come in, and that includes me most of the time.”

Rainer was born in Germany but has been in the U.S. since age four. He always had an interest in cycling but wasn’t really looking to purchase a bike shop when he bought Menlo Velo from the original owner in 1995. “I’d spent a dozen or so years working for a big medical imaging company and decided I didn’t want to do that anymore,” he said. “I was looking for a business to purchase, and Menlo Velo became available.”

He’s weathered financial downturns and is now at the point where business grows each year. “There’s been a whole cycling revolution whether it’s road, mountain or commuter bikes,” he said. “The biggest change has been with the commuter; there are a lot of cyclists who bike/train to work.”

Menlo Velo offers bikes priced from $200 or $10,000 as well as a wide selection of bike accessories like helmets. “The current craze is the advent of lightweight carbon, which began five to eight years ago,” he said. “For $5,000, you basically get a bike that pros ride.”

Once a customer selects a bike — at any price — the crew at Menlo Velo does a custom fitting. “That includes a whole series of things,” said Rainer. “It’s something we’ve gotten into more in the last few years, an area that continues to grow.”

I agree. Menlo Velo is the best bike shop around. And, they’ll go the extra mile for you. Yesterday (Sunday), I stopped in 10 minutes after they closed. I had just had a blow-out while riding and they stuck around to install a new tire and tube for me. I’ve been a patron of Menlo Velo for more than 20 years and I always get this kind of service from them.

Wonderful portrait Scott! Have enjoyed so many of your photos and had great time going through your website linked from the InMenlo link.
Irene

I rented from Menlo Velo when I was out visiting some friends. They were awesome, great service, excellent equipment and fantastic prices. I was rocking the Menlo Velo water bottle back here in Oklahoma but I melted it in the dishwasher. It was a sad day.

Thanks Irene. Its always fun to photograph someone you like as much as I like Rainier. He and his great team have been keeping my family’s bikes on the road for years.

I could not agree more. An excellent service and extremely nice group of people. When I walk in the shop, where I have been going for more that 10 years, it feels a bit like visiting family!