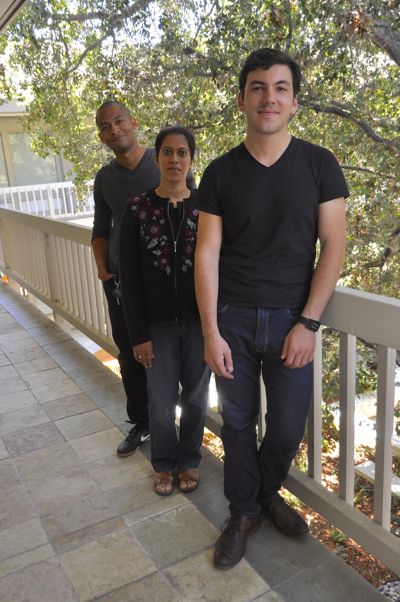 Two men and a woman — all associated with Stanford University — are hunkered down at Lightspeed Ventures in Menlo Park, part of the firm’s summer fellowship program. The app they’re working on just may save a teenager’s life.

That’s the premise of Drive Pulse, which the team is currently beta testing with Menlo Park parents. The iPhone app instantly notifies a parent about dangerous driving habits. It can detect accidents and diagnose car problems. The app sends alerts to anyone who installs it on their phone and links it to a car, so theoretically kids can install the app and get feedback as well. It also may be useful to adult children who are concerned about the driving abilities of their aging parents.

“The way we see it is that parents are putting their most precious cargo — their kids — in one of the most dangerous machines, an automobile,” said Giancarlo Daniele (pictured, far right), part of the three-person team that also includes Caleb Marshack and Poorna Krishnamoorthy.

“Among us, we have experience with algorithms, data analysis, and building apps for cars,” he said.  “We knew that driving safety was a huge problem, so we sought a way to solve it. Drive Pulse is based on current automotive research [Professor Cliff Nass’s class at Stanford], an early partnership with BMW — I was part of a team that made a presentation to BMW research in Germany — and the feedback of Menlo Park parents.”

They are continuing to recruit local families with teen drivers. If your interested in participating in the the beta test, you can request an invitation by emailing info@drivepulseapp.com or by filling out the form on  the website. “If they enter ‘InMenlo’ in the ‘invite code’ box, we’ll extend the trial period,” said Giancarlo.

I recently saw this article and I have triplets who are 16 with driving permits. I think this is wonderful and would love to participate. Thank you