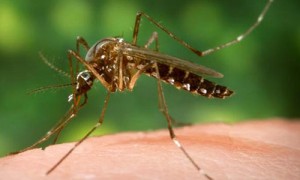 Last Friday (8/23) the California Department of Public Health confirmed the identification of a yellow fever mosquito (Aedes aegypti). San Mateo County Mosquito and Vector Control District found the mosquito  at Holy Cross Cemetery in west Menlo Park. The Aedes aegypti species is not native to California; however it is a common mosquito in urban areas of the southeastern United States.

The yellow fever mosquito has the potential to transmit several viruses, including dengue and yellow fever. This type of mosquito was found earlier this summer in the counties of Fresno and Madera; no illnesses associated with this mosquito have been reported so far.

The Mosquito and Vector Control District will expand surveillance efforts and deploy a variety of traps for adult mosquitoes and mosquito eggs surrounding the location where the Aedes aegypti mosquito was found. Additionally, District staff will be conducting door to door inspections of homes and providing educational materials to residents in the neighborhood.

“It’s important to note that the current risk of disease transmission from this mosquito is extremely low”, said Dr. Scott Morrow, Health Officer for San Mateo County. “But we must make every effort to eradicate this mosquito and not allow it to establish itself here to prevent future disease transmission risk. The public can really play a critical role in helping to control the spread of this mosquito population. The yellow fever mosquito lays its eggs in water, just above the water line in small containers and vessels that hold water, such as pots, pet bowls, bottles, and bird baths. It’s important to survey your yard and around your house to eliminate even the smallest amount of standing water.”